Bryan Thubron famous wife is British writer and television broadcaster Denise Robertson. She is perhaps  best known as the resident agony aunt on the ITV show This Morning since its first ever broadcast on 3 October 1988.

Denise Robertson has been This Morning’s agony aunt since the first show broadcast on 3rd October 1988. In the last 25 years she’s replied to thousands of viewers’ letters, offering comfort and wise words of advice.

Denise Robertson was born Margaret Denise Broderick on June 9, 1932. She has kept active by participating in a number of projects. She first appeared on TV as the presenter of the Junior Advice Line segment of the BBC’s Breakfast Time programme in 1985. Fast forward to year 2000, when she was given her own television series called “Dear Denis.”

In 2006 she was made an MBE and was given the freedom of the City of Sunderland in the same year. Denise was also appointed a Deputy Lieutenant of County Durham in 1998.

Robertson has also collaborated with national magazine, Candis, by writing a monthly column. She has written a number of books including: Denise’s book: A to Z of Love, ***… and Exasperation was published in January 2012. Her latest book Don’t Cry Aloud, was published in May 2015.

Most recently, audiences have been able to enjoy her on her regular appearances on Channel 5’s Big Brother’s Bit On The Side. 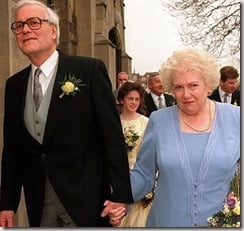 Denise Robertson has been married three times and is twice a widow. Her third and current husband is Bryan Thubron.

Denise was first married to Alexander Robertson. The couple tied the knot in 1960, two years later Denise Robertson gave birth to a son, Mark Alexander. Her first husband died of lung cancer in 1972.

In 1997 she married, childhood friend, Bryan Thubron, becoming the stepmom to Bryan’s four sons. Bryan Thubron and Denise dated when still at school.

Bryan Thubron is an Honorary Club President of the Boldon Lawn Tennis Club.

In 2006 Denise suffered the loss of her stepson, John –who died of cancer, at the age of 44. John was the son of her second husband, John “Jack” Tomlin.

Denise Robertson has announced she has been diagnosed with pancreatic cancer, she passed away on April 1, 2016. She was 83.