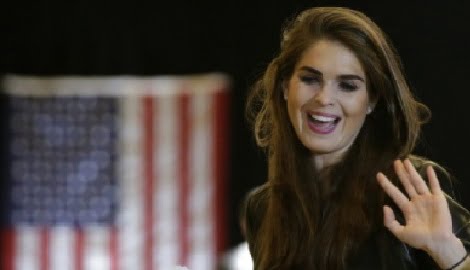 Hope Hicks is a longtime Trump aide who has been named Interim White House communications director.

Hicks might only be 28-years-old but she’s been close to the Trump family since 2012. Following her graduation from Southern Methodist University she began working at Hiltzik Strategies, a public relations firm in New York that works with Ivanka Trump and the Trump Organization.

She became involved with Ivanka Trump’s fashion line and other Trump Ventures. Two years later in 2014, she was employed by the Trump Organization full time. Hope Hicks went from working with Ivanka inside Trump Tower to becoming press secretary for Trump’s presidential run.

Her previously title was of White House Director of Strategic Communications. Earlier this year, she was included on the Forbes 30 Under 30 list, having “served as a one-woman press team for Trump’s historic presidential campaign. But there seems to be a lot more to the gorgeous Hope Hicks. Born Hope Charlotte Hicks on October 21, 1988 –she comes from long list of family members who have worked in politics; including both her parents, her paternal grandfather and maternal grandfather.

Hicks grew up in Greenwich, Connecticut where she swam at Greenwich Country Club, was co­-captain of the lacrosse team at Greenwich High School, and played lacrosse all four years in college.

Growing up, she and her older sister, Mary Grace were teenage models. Hope and her sister were hired for a Ralph Lauren campaign. She was also tapped as the face of the Hourglass Adventures. Her sister is now a paramedic.

With great looks and a mysterious personality Hope has been labeled as a little bit of an enigma. She is not very active on social media, she often declines interviews and always stays behind the scenes. According to a GQ profile on her, she and her boyfriend dated for six years but the demands of her job led to a breakup. By the looks of it, Hope Hicks will remain single for some time, at least until she keeps working for the Trump administration.

Will Hope Hicks be the right woman for the job? Comment below.