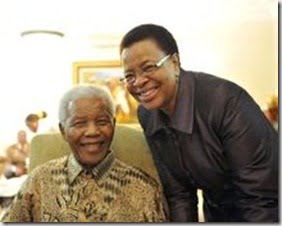 94-year-old Nelson Mandela was rushed to a hospital in Pretoria on Saturday with a recurring lung infection. The South African president’s office said the former leader was in a “serious but stable condition.” He remained in intensive care Monday, breathing on his own. Mandela’s his wife, Graca Machel Mandela, was by his side after cancelling a trip to London.

Graca Machel, born Graca Simbine, is Mandela’s third wife and the widow of Mozambican president Samora Machel. She is a politician, humanitarian, and an international advocate for women’s and children’s rights. In 1997, Graca was made a British dame for her humanitarian work.

Graca Machel Mandela was born in October 17, 1945 in rural Incadine, Gaza Province, Portuguese East Africa. She attended Methodist schools and later studied German at the University of Lisbon in Portugal with a scholarship. Graca also speaks French, Spanish, Italian, Portuguese and English, as well as her native Tsonga. She returned to Portuguese East Africa in 1973, joined the Mozambican Liberation Front and became a school teacher.

In 1975, Graca Machel was named Minister for Education and Culture, the same year she married Samora Machel. Then she was appointed as the expert in charge of producing the United Nations report on the impact of armed conflict on children. Her first husband died in a plane crash in 1986.

For her longstanding humanitarian work, particularly on behalf of refugee children, Graca received the 1995 Nansen Medal from the United Nations. She was also one of the two winners of the North-South Prize in 1998.

Graca Machel marrried the South African president Nelson Mandela on July 18, 1998, the day he turned 80 years old. They did not have any children, though her husband has 6 children from previous marriages. Graca currently serves as the chair of the Association of European Parliamentarians with Africa (AWEPA) Eminent Advisory Board. 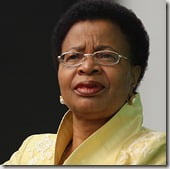