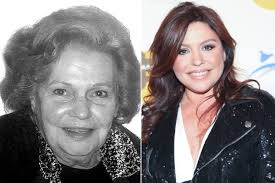 While she was house sitting her sister’s house, Geraldine Dominica Scuderi died. Elsa Scuderi, Rachael Ray’s mom and sister of Geraldine, was paying her $300.00 a week to house sit for her. On the day after Thanksgiving, Geraldine went out to the yard to feed the birds. The door locked behind her and she was locked out. She unfortunately did not have a key, and was found the next morning dead outside the Queensbury house.

Gina Mesnick, Gealdine’s daughter, has allegedly placed the blame on Rachael’s family. Home security cameras show her desperately trying to break a window to get back in. The high temperature for that day was 28 degrees. It is also rumored that she had not been given a key.

The cause of the 77 year old woman’s death was listed as a heart attack. She had a history of heart and respiratory ailments.

Rachael and her husband John Cusimano did not attend Geradine’s funeral as she was busy taping her show’s season finale. A spokesperson told the New York Post that “Rachael and her family were shocked and deeply saddened by the tragic and untimely passing of her aunt in late November.” The video clip below was filmed this week.

There are a lot of unanswered questions about this story. Why was such an elderly woman house sitting?. Why wasn’t she at home with her daughter? Why would she need the $300.00 a week?  Did Geraldine have a key to the house? If not, why not? Why would this be Rachael’s fault? This is just for starters. If we get any answers we will be sure to update you on the whole thing.