Dezann Romain, a New York City public school staff member has reportedly died due to complications from the coronavirus also known as COVID-19.

Dezann Romain who was in her 30’s was a Brooklyn native who served as a principal at Brooklyn Democracy Academy in Brownsville. She is one of 125 New York City residents to die of COVID-19. She was only 36 years old. Mayor Bill de Blasio said the number of positive cases in the city was at 13,119 as of Monday.

Romain was the principal of a transfer high school for overage or under-credited students. She was a member of the Council of Schools Supervisors and Administrators, a union representing New York City’s school supervisors and administrators.
CSA said in a statement ‘It is with profound sadness and overwhelming grief that we announce the passing of our sister, CSA member Dezann Romain, Principal of Brooklyn Democracy Academy, due to complications from Coronavirus’ 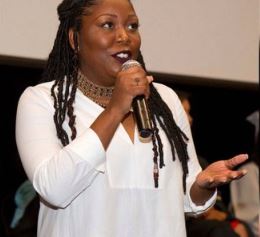 The Post noted that between 2016 and 2017, Romain was promoted to principal of the school that caters to transfer students who had struggled at traditional high schools.
According to Chalkbeat, Romain worked hard to make the school part of the “fabric of the community,” “never pitied her students” and was a “dedicated professional” educator.

She has been praised by other school staff members as someone who ‘gave her entire self to that community, and it did not matter how incredibly complex a problem was’ ‘She was always rolling her sleeves up to do whatever she could to solve it.’
As for her students
‘She never pitied her students. She never second-guessed what she was there to do,” he said. “She took every kid as her mission.”

Dezann Romain also found as Dez-Ann Romain graduated from Far Rockaway High School with honors in 2001. The Caribbean migrants, was raised by low-income parents in the ghetto.
During her senior years she served on the Student Government Association, working as Set Designers for the school’s production of “The Wiz & Grease,” and was a member of the National Honor Society and the Class of 2001 Year Book Committee