Deborah Binner is the wife of British born, Simon Binner, a 57-year-old father and grandfather from Purley who updated his professional profile adding the date of both his upcoming death and funeral.

Simon Binner –a Cambridge graduate –has been fighting motor neurone disease since last January. Deborah’s husband is making headlines after writing on his LinkedIn page:

Simon and his wife live in a £1.3m home in the suburb of Purley, Surrey; he is currently preparing to end his life through assisted suicide at a clinic called Eternal Spirit, a organization which says it promotes the legalization of assisted voluntary death, the Daily Mail, reports.

The post, which is listed under the ‘experience’, section of his online CV, reads: ‘I was diagnosed with aggressive Motor Neurone Disease (MND) on 7 Jan 2015. ‘As I was driven home I had already decided what I would gladly have to do when my time was upon me.

UK’s current assisted suicide law forces Deborah’s hubby to go to Switzerland to die. In a number of videos posted online to his Facebook page, Simon explains his condition rapidly worsen, thought he was told he would last till 2018.

Deborah admits seeing her hubby go from a “workaholic, leader, a natural communicator, a very big character and alpha male, has been like ‘waking up to a nightmare every morning.’

He worked as an Operations Director at Caremark for over 2-years. His background is in Mechanical Engineering and as a business executive working in the software industry.

According to his Caremark profile, Simon left the software industry in December 2012 after many exciting years of leading high growth software companies, many from startup through their initial high acceleration phase. His final 5 years in software were spent running the UK operation for a telecoms software company, cVidya. 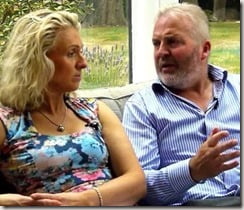 As for Debbie Binner, she is a former TV presenter. She worked in healthcare PR and Media and as Head of Communications for the Department of Health. She’s currently a managing director for the Sutton Caremark Team.

This would be Deborah’s second tragedy. In 2013 she lost her first daughter, Chloë aged 18. Her daughter’s death also caught some media attention. Her daughter died due to a rare bone cancer and due to her age she was denied experimental drugs.

Deborah and Simon have been married for 14-year. She admitted she doesn’t believe in assisted suicide but she can’t force someone to live and go through the process of MND.