Blanche Gardin is the French girlfriend of comedian, Louis CK –the same who who’d acknowledged asking female colleagues to watch him **********.

Blanche’s boyfriend is grabbing headlines once again, this time for his latest comedic endeavor. The 51-year-old comedian, apparently made fun of survivors of the Parkland school shooting and their effort for stricter gun control –he made the comments during a recent comedy set.

The Washington native was on the original writing staff of Late Night with Conan O’Brien and also wrote for the short-lived Dana Carvey Show.

The star of the Emmy-winning FX series Louie –is the father of two daughters with Alix Bailey, whom he was married to from 1995 to 2008. 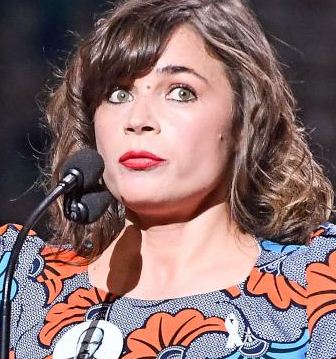 New lady, Blanche Gardin is a triple threat, born in April 3, 1977 –the French woman is a comedian, actress and writer. She attended the Paris West University Nanterre La Défense –from where she obtained her Master of Sociology.

She worked with children and, on the side, made comedy videos with friends. In her early 30s, when she was hospitalized after a breakup, a psychiatrist suggested that she write about her own life.

Blanche Gardin who has been active since around 2006, she’s landed numerous roles on French TV shows and French movies. She’s also done theater and is the author of the 2006 book, Il faut que je vous parle!

She and CK were romantically linked earlier this year after the two were photographed hanging out in New York. CK had a more aggressive approach when he revealed last month during a stand-up show –he and Gardin –are in fact an item.

During an interview according to the NY Times, their relationship is actually a lot more deep than what it seems. Gardin claimed she was saved by watching Louis CK’s videos and by her psychiatric.

She was stunned to watch him perform and realize he stood at the microphone and described his own life. By 2014, she began doing a one-woman show in a small theater.