Audra Rochelle is the stunning girlfriend of Chris Blinston –whom you know as a contestant on Ink Master, is off the hook in battery charges.

Last month Blinston –who is a former marine –was accused by his girlfriend of ending an argument by picking up a safe and pressing it against her chest to move her outta his way.

Audra Rochelle then called cops and they arrested him for battery. He denied touching her and now prosecutors have declined to file charges.

This is not the first time Chris is accused of assault. You might recall last year, his own daughter accused him of choking her. At the time, the 13-year-old teen told the cops her dad, used both hands to squeeze her neck, leaving her unable to breathe for around 10 seconds.

Blinston said she framed him and prosecutors eventually dropped those charges too. 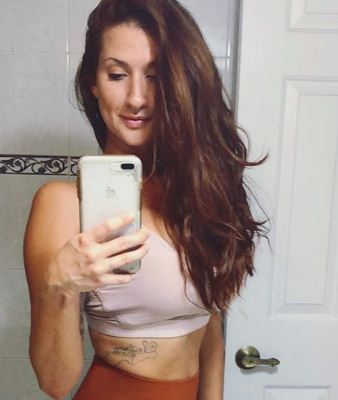 Blinston, who appeared on Season 6 of the Spike series in 2015, owns a tattoo shop in Coral Springs, Florida. His inkwork includes depictions of vampires, clowns and insects. In addition to his shop, he makes personal appearances at tattoo events all over the country.

44-year-old Chris is the father of two young children in addition to his teenage daughter. The spat between the two apparently began when the tattoo artist t old his girlfriend he wanted the birth certificates for their three children.

She allegedly responded by saying the docs were locked in a safe and she’d get them later –that’s when things got tense and Chris allegedly grabbed the safe and threatened to open it using an ax.

The girlfriend and mom of three, told cops that he pressed the safe against her chest and moved her out of his way.

Do you think Chris and the mother of his children have a shot at working things out? Rochelle who resides in Florida with her children, is a model. According to her Model Mayhem profile she is 30-years-old and her full name is Audra Rochelle Marino.