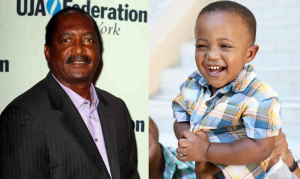 Alexsandra Wright and Mathew Knowles, Beyonce’s father, had an affair while he was still married to wife Tina. The affair lasted eighteen months and resulted in the birth of adorable baby boy Nixon.

Knowles eventually divorced Tina, but he allegedly has never even seen his boy who was born on February 4 of 2010. DNA tests were taken and confirmed that Knowles was the father.

Alexsandra Wright, a television actress who has appeared on “Scrubs” and “Jag” claimed in 2011 that Knowles had  suggested that she hand over her child to his daughter Beyonce for her to raise with her husband. She stated that nothing in the world could make her give up her child. She also alleged that Knowles had issued a veiled threat to her.

Now , Alexsandra is claiming that Mathew owes $24,000 in child support for his 3-year-old son, Nixon. California State records that show Mathew missing two $12,000 monthly payments. She also says that she’s had to pull her son from school because she can no longer pay the bill.

Alexsandra goes on to say, “Those close to me know my primary concern is my son Nixon’s welfare and well-being; both now and in the future. I feel that it is important for him to know, when he comes of age, that he wasn’t a mistake and that he was a product of love!”

Alexsandra is now looking forward to her day in court, which will be this Friday. Along with her for support will be her new fiancé Henry Waldon of Celebrity Fit Club.