Annie Glenn is the long time wife of Astronaut turned US. Senator, John Glenn. She her husband have been married for over 70-years. Keep reading to know Annie Glenn’s  biography.

John Glenn was the first American to orbit the Earth. Before becoming the Ohio Senator, Glenn was one of the original members chosen by NASA to become America’s first astronauts and fly the Project Mercury spacecraft.

He left school to fight in the World War II. He became a Marine pilot. Later, he trained other pilots. He also fought in the Korean War. After Korea, he became an airplane test pilot. In 1957, Glenn set a speed record when he flew from Los Angeles to New York in less than 3 1/2 hours.

Glenn was a highly decorated Marine who flew 59 combat missions in the South Pacific during World War II. During the Korean War, he flew 90 combat missions, using different models of new jet fighters.

He remained in the military through the 1950s, testing supersonic aircraft and other military models. In all, he earned the Distinguished Flying Cross five times. In 1958 he was one of 508 pilots tested for what became the Mercury program, an accelerated response to the Soviet Union’s successful launch of the first satellite in 1957.

They had to be test pilot school graduates in excellent physical shape, less than 40 years old, shorter than 5 feet 11 inches, qualified jet pilots, and they had to have at least 1,500 hours flying time and bachelors’ degrees in engineering. Glenn met all the requirements.

In 1974, he was elected to represent Ohio in the U.S. Senate. Two years later, Glenn’s name was among those mentioned as a running mate for Democratic presidential nominee Jimmy Carter, but Carter ended up picking Sen. Walter Mondale of Minnesota.

He remained in the Senate, serving four six-year terms. He was a senator for 25 years.

During his Senate career he was noted for his attention to NASA and to national defense. He was also remembered for his support for the Panama Canal treaty in the late 1970s and for his resistance to the decision to televise the Senate floor debates on C-SPAN. 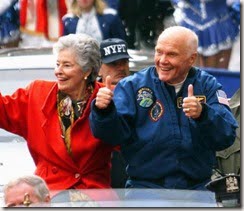 Glenn made history a second time in 1998, when he flew aboard the shuttle Discovery to become the oldest person to fly in space. 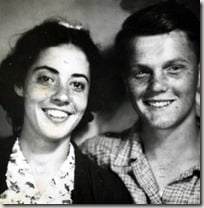 Like john, she was also a student at Muskingum College in New Concord, Ohio. Annie received a BS degree in 1942, with majors in music and education and became an accomplished organist.

The two knew each other since they were young children because their parents were close friends.

The childhood sweethearts went on to marry on April 6, 1943. Glenn is survived by his wife, their children and grandchildren. 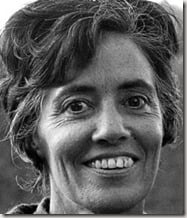 Annie Glenn went from being the Astronaut’s wife, to the Senator’s wife. Though Annie was a stutterer, that didn’t stop her from having a fulfilled life. Much like her husband, Annie Glenn has certainly left her own mark.

As the wife of a military man, she and her husband moved often. Traveling across the country with two children can be a great difficulty for anyone, but especially for someone with her kind of communication problem.

Annie’s severe handicap was certainly something she had to deal with; according to online info, as she got older she faced everyday tasks and conversations with great courage.

Annie inspired a lot of people to get treatment for their disabilities. Through the American Speech and Hearing Association (ASHA), she would meet with people to tell her story and how she stuck with her treatment. ASHA was impressed enough by Annie’s accomplishments that they now give an award in her name.

Annie has served as a longtime spokesperson for the Foundation. She chaired National Stuttering Awareness Week, has been featured on posters, in press releases and in the Foundation’s public service ads. As a symbol of courage, she is a real inspiration to all women who stutter.