Alisha Flick is the devastated wife of late Texas resident, Felipe Gallegos -who passed over the weekend as he was hanging Christmas ornaments.

Alisha’s husband tragically died after taking a fall while hanging Christmas lights for a client over the weekend. Gallegos according to reports, hanged lights during the Christmas season and was the owner of a window washing business. 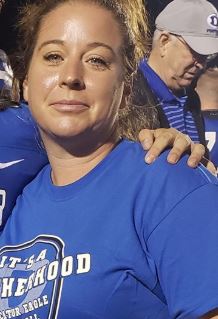 Gallegos allegedly fell from the roof of a client’s home; he sustained serious injuries including a skull and chest fracture. He was rushed to the emergency room but died shortly after.
Gallegos is survived by his wife of several years and their teenage son. A GoFundMe page was set up in the family behalf and which states that Gallegos was the main provider for his family and self employed. It has raised over 50k from its 20k goal.
Felipe Gallegos was originally from Las Vegas, New Mexico and went to Lawrence D. Bell High School.

Alisha Flick told local news that she met Gallegos 22-years ago. Together they share a 17-year-old son. She wrote on Facebook
“Anyone who would like to say their goodbyes Felipes funeral is Thursday December 5th from 6p.m. to 8.pm. at Hawkins Funeral Home in Decatur Texas”

According to her social media, Alisha Flick studied at Tarrant County College and worked at McCarroll Middle School. The spouse and mother of one remembered her husband saying “He always had a smile on his face, and he was always goofy and making everybody laugh” She also told ABC that she’ll try to re-start the business, which was their only source of income.
Her son, Kaymin Flick -is a senior at Decatur High School and plays on the Eagles’ football team.
Alisha and her late husband and son live in Rhome, Texas.