Jeannie Suk was once the wife of legal expert Noah Feldman -who is making headlines in the Trump impeachment hearing.

Jennie’s ex-husband is a professor at Harvard Law School who has written widely about religion and the law. The 49-year-old specializes in constitutional law and the relationship between law and religion and free speech.

A graduate of Harvard and Yale Law School and a Rhodes Scholar, he clerked for Justice David H. Souter of the Supreme Court. Justice Souter was appointed by a Republican president. He served as a constitutional adviser to the American-led Coalition Provisional Authority in Iraq.
He has written eight books and been published broadly, including in The New York Times Magazine and Bloomberg News.
He was married to Jeannie Suk from 1999 until 2011 -who is Harvard Law School‘s first-ever tenured Asian-American woman professor. During their time together the former couple was known in law-circles as Feldsuk. 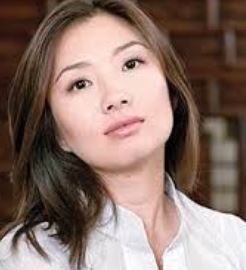 Jeannie Suk was born Jeannie Chi Yong Suk in 1973, a daughter of Song Nam Suk and Dr. Chang Ho Suk. Her father was a gastroenterologist in Flushing, Queens. Her mother helped managing the practice and served as a director of the Flushing branch of the Y.W.C.A.

Jeannie a New York native with South Korean roots, graduated from Yale and received a doctorate in philosophy in modern languages from Oxford University, where she was a Marshall scholar.
Early in her career Dr. Jeannie Suk was a visiting lecturer on cultural exchange and interaction in literature at Yale College in New Haven, and an affiliate scholar at the Columbia University Center for Psychoanalytic Training and Research in Manhattan.

She now goes by Jeannie Suk Gersen following her 2014 nuptials to current husband, Jacob E Gersen. She is currently listed as a professor at Harvard Law School -where she has taught constitutional law, criminal law and procedure, family law, and the law of art, fashion, and the performing arts. Before joining the faculty in 2006, she served as a law clerk to Justice David Souter on the United States Supreme Court, and to Judge Harry Edwards on the U.S. Court of Appeals for the D.C. Circuit.