Alexis Ilijasic is the woman whose husband was tragically killed after falling from a Manhattan skyscraper!

Bruno Travalja, an architect, died after falling 42 floors of a Midtown building on Thursday afternoon. Reports say, Mr. Travalja was working onsite when he lost his balance and fell from the building located at 135 West 52nd Street.

The Department Of Buildings and the NYPD are investigating what led to the fall. One of the theories is that Alexis’ husband may have knelt down to measure something and felt dizzy after getting up. He was there to install a glass barrier for a rooftop terrace, according to the Daily News.

52-year-old Bruno Travalja who was originally from Ridgewood, New Jersey; was pronounced dead at the scene.

Bruno Travalja was the owner/operator at Crowne Architectural Systems, located in Hackensack, New Jersey. Accoridng to its website, Crowne ‘has been building its impressive portfolio since 2005.’ The company specializes in curtain wall systems and exterior facades.

According to social media info, Alexis studied Architecture at Pratt Institute, graduating in 1987.

Travalja is survived by his wife and their three children. 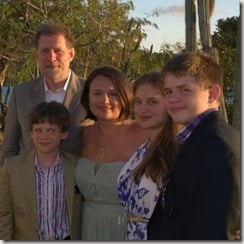 Her grandmother, Natalija Ilijasic died aged 96 in 2010, her obituary says.

She is the mother of two sons Luca and Aidan, and one daughter named Taylor. The family often enjoyed traveling to Croatia and Australia.

Bruno often posted on social media about his children. Daughter Taylor enjoyed horseback riding. In one of his FB posts he captioned a photo of his daughter saying: ‘Taylor with her horse, she is the happiest when she is riding.’

People close to Alexis husband have described him as a fair boss. Others have expressed their condolences saying he was a hard worker and that even though he was the owner, he was very ‘hands on.’