Akram Joudeh is the Muslim man who has been accused in a meat cleaver attack. Reports say, Joudeh ended at the hospital with gunshot wounds after he attacked officers with the big knife on Thursday.

It all started when Joudeh was found by two cops while he tried to remove an immobilizing boot from a parked vehicle. Apparently he had parked in the middle of the street and police believes he was living inside his car.

As the 32-year-old saw them, he grabbed an 11-inch meat cleaver and took off. The chase began and according to police, Joudeh was shot with a taser in an attempt to stop him. They called in for backup and during the confrontation, the enraged attacker gave an off-duty NYPD detective a 6in gash on the face.

Three officers resulted injured and Joudeh was shot multiple times on West 32 Street, near Penn Station, according to the Daily Mail.

The officers and the attacker were taken to Bellevue Hospital, following the dramatic chase, that was captured by people’s phones during rush hour.

New York media reported through sources that Joudeh is from Queens and was born in Jordan. 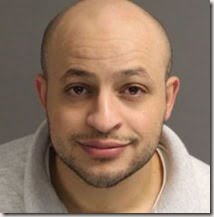 Though terrorism links have been discarded, Akram Joudeh is definitely a bad seed, it is not the first time he gets in big trouble with the law.

Accoridng to news outlets, he has 15 prior arrests. Akram has been jailed in the past for charges that include larceny, criminal possession of stolen property, criminal mischief and unauthorized use of a vehicle.

Back in 2009 he was charged with grand larceny and criminal possession of stolen property. The felony charges were dismissed.

The following year, he pleaded guilty to a misdemeanor petit larceny and was sentenced to 90 days.

Three years ago in 2013, Joudeh used a wooden fence post to smash up a 2009 Chevy while it was parked at 25th Avenue and 96th street in Queens. He pleaded guilty to the top count, fourth-degree criminal mischief, and was sentenced to 60 days in jail.

Most recently he was arrested for weapons possession. Police stopped him back in July while pacing back and forth in front of a Manhattan Beach, Brooklyn, synagogue. His vehicle was parked outside the synagogue, and inside, officers found a pair of knives. The charges were later dropped.