Aaron Phypers is the now ex-husband of actress Nicollete Sheridan. Shocking reports say the 52-year-old actress secretly tied the knot to younger beau, Aaron Phypers but apparently backed down and doesn’t want to be married to him any more.

Though successful in her professional life, Sheridan has failed to find herself a lasting relationship.

Her love life has been well publicized, she has been linked to a string of famous and not famous men. She dated singer and actor Leif Garrett from 1979 to 1985.

Her marriage to Aaron Phypers was not the blonde’s first marriage, she wedded actor Harry Hamlin in 1991 –while she was starring on Knots Landing –but they called it quits the following year and were legally separated in 1993. They worked together in the 90’s TV movie, Deceptions.

In the early 2000’s she was in a relationship with Nicklas Söderblom –a Swedish personal trainer.

The blonde beauty got engaged to the personal trainer on New Year’s Eve 2004 but they called off their engagement in October 2005.

She then moved on to ex-boyfriend Simon Main in 2005, they were an item in 1997 as well. She and Michael Bolton were engaged in 2006 after they were reunited from their five-year relationship in 1992. They broke their engagement in 2008. 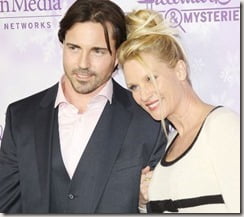 Canadian born Aaron Phypers began dating the former Desperate Housewives star, in late 2014.  Throughout 2015, they were photographed a number of times, one of them looking relaxed at The Six Restaurant in Calabasas, California.

Aaron Phypers’ has done contracting jobs for years, from plumbing to heating, to concrete, anything that has to do with construction, he is your man.

According to People, she filed for divorce six months after secretly marrying Aaron Phypers. The ex-couple allegedly said “I Do” in December 2015. Accoridng to court papers, she and Aaron Phypers separated in June, she cited irreconcilable differences.

Earlier this year there was speculation the couple getting married. A source claimed: “Nicollette and Aaron are very much in love and they might get married anytime this year.

Sheridan is asking the judge to deny spousal support.