Geoffrey Dwight is the much younger half-brother of iconic British singer, Elton John.

Geoff and Elton -born Reginald Kenneth Dwight -share the same dad, Stanley Dwight – a former World War II fighter pilot. However, the two have not had much of a relationship. Stanley Dwight divorced Elton’s mom Sheila Eileen Dwight when Elton was 14. According to Elton, it wasn’t a happy marriage. He was their only son.

Stanley remarried Edna, with whom he fathered Elton’s four half-brother Geoff, Stan, Simon and Robert. Stan, became an accountant; Robert worked for the Lottery operator; Simon is a civil engineer.

The half-siblings didn’t get to spend much time together; as Elton’s career began to rise, Geoff found himself on a path that led to jail. Despite winning a scholarship at the local school, he was given a four-year prison sentence for a bungled robbery at 18-years-old. 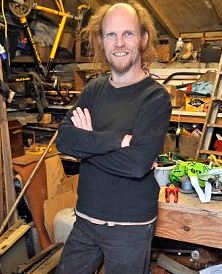 Since then, he’s done a number of odd jobs to make ends meet including working as a software programmer. The 52-year-old lives in North Wales with his partner Karen. Together they have at least seven children. According to the Daily Mail, Geoff’s hobbies include building yurts, smoking ­cannabis, building Celtic harps and of course, music.

Geoff is coming forward speaking his mind in regards to his famous brother’s biopic “Rocketman.” According to Dwight their father is portrayed in a cold and unloving way and says that is not the father he remembers, explaining “He was a product of a time when men didn’t go around hugging each other and showing their feelings every minute of every day, but he had plenty of love in him for all of us.”

This is not the first time Geoff is vocal about his father and Elton’s relationship. In the past he’s said Elton didn’t even came to their father’s funeral, and it was Elton who was cold about their father.

When he finally tracked him down to tell him their father was dying, Stanley had passed. “He’d died the day before,” Geoff said. “I told him about the arrangements for the funeral and Elton just said, ‘No Geoff, I’m not coming.’