Elizabeth Zimmerman is the former wife of Philippine President Rodrigo Duterte, the two were married for nearly three decades prior to their divorce.

Duterte was elected president of the Philippines in 2016; the 74-year-old is well known for using homophobic slurs to insult political opponents. His use of raw and vulgar vocabulary keeps him in the headlines.

Born March 28, 1945 in Maasin City, Philippines; he graduated in 1968 with a Bachelor of Arts degree in Political Science at the Lyceum of the Philippines University and obtained a law degree from San Beda College of Law in 1972.

He served as special counsel and later on became a city prosecutor at the City Prosecutor’s Office in Davao City from 1977 until 1986, when he was appointed as OIC Vice Mayor of Davao City. 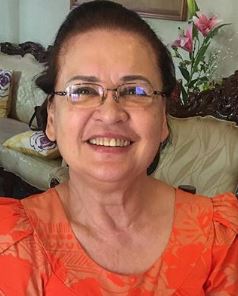 He is among the longest-serving mayors in the Philippines and has been Mayor of Davao City for seven terms, totaling more than 22 years. He also served as vice-mayor and as congressman of the city’s first congressional district.

In recent news, Duterte has credited his ex-wife, Elizabeth with turning him into a ‘man.’

The former political spouse was born Elizabeth Abellana Zimmerman on April 14, 1948; the Davao native made a career as a Filipina flight attendant.

During their marriage the former couple welcomed three children together, Sara, Paolo and Sebastian Duterte. Sara Duterte was born May 31, 1978. She is a lawyer and politician and the current mayor of Davao City. She is married to Manases Carpio with whom she has two children Mateo and Sharky.

Paolo “Pulong” Zimmerman Duterte was born March 24, 1975; he is a politician who served as the mayor of Davao City but resigned in 2017. Paolo is married to second wife January Navares, together they have two children. He and first wife, Lovelie Sangkola produced three children during their 16-year-marriage.

Sebastian who also goes by Baste, showed no interest in politics instead going into the business world.

Elizabeth Zimmerman and Duterte have been legally separated since 2000. Following their separation, the ex’s have been photographed together a number of times and are said to be amicable to each other. She was diagnosed with stage 3 breast cancer in 2015. She’s even put cancer treatments on hold to campaign for her ex.