Mark Rutte is a Dutch politician currently serving as the Prime Minister of the Netherlands for the last eight years.

Rutte paid a visit to the White House recently and was addressing reporters alongside President Trump when he interrupted him saying ‘no’ to Trump’s statement that failing to find agreement with the EU on tariffs would be “positive.”

So who is the Dutch politician who said no, to Trump? Get to know below 10 facts about him. 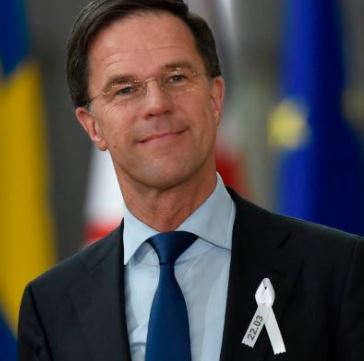 During a 2015 interview for women’s magazine Margriet, the prime minister said he is just as sensitive as the next person.

#2 He doesn’t have a temper

Rutte who is described as having an ‘eternal smile’ has also revealed, he only ‘slams the door twice a year and then pokes his head around to say sorry’. His attitude allows him to shrug things off, no matter what his political opponents throw at him.

#3 He wanted to be a musician

Born, February 14, 1967; Rutte had originally planned to attend a conservatory and become a concert pianist. Instead, he attended Leiden University earning a MA degree in history.

Rutte is a former businessman who held important positions at Unilever. He served as manager for Unilever’s food subsidiary Calve. He played a key role in a number of reorganizations within the Human Resources department. He was also a staff manager for Van den Bergh Nederland and was named human resource manager for IgloMora Groep.

Rutte spends one morning a week teaching Dutch and Civics at a nearby secondary school.

He told Margiet, he uses a Nokia phone to send texts and blamed his big thumbs for making it hard to use a smartphone.

#8 He also has an active role in international affairs.

#9 He comes from a big family

Rutte was born one of seven kids, his oldest brother is 35 years older than him.

At 51-year-old, Rutte does not have a wife, has never been married and doesn’t have children of his own either.