Raven Gates is one of the gorgeous women lined up to meet who could potentially become the love of her life! That’s right, season 21 of the Bachelor, already began filming and we are back to tell you everything you need to know abut the **** contestants, after bachelor 17th, Nick Viall.

This is Raven Gates’ turn –whom according to spoilers, she’ll have an important presence during the season, that can only mean we’ll get to watch Raven Gates getting pretty close to Viall.

Gorgeous Raven hails all the way from Hoxie, Arkansas. She is the daughter of parents, Tracy and Wes.

Through her social media, Raven shares that her father battled with cancer two years ago.

Her parents have been married for 30-years –something that Raven is very proud of. She is most definitely very close to her family.

She often posts about her family, brother Weston and also her nephew and niece. She is also a church goer –which can be a major plus to Nick.

While attending school in Arkansas, Raven was an athlete. She used to keep a blog where she talked about sports and fashion.

The 25-year-old dark haired beauty currently resides in Jonesboro, Arkansas where she owns a clothing store.

Raven recently starred herself as a boutique owner. She opened ‘Grey Suede’ last spring. She is definitely out to win fans, the contestant is also offering merchandise with the hashtag #teamraven smart huh! 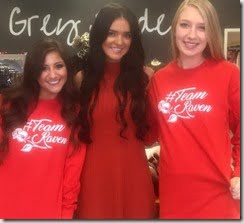 Is to be expected someone as pretty as Raven would be dating someone, as a matter of fact, she seems to have had a relationship earlier this year. However, she also seems to have been very focused on her new business.

In order to know, you just have to wait and see!