The couple, and more precisely her husband is making headlines after their home was raided by FBI agents conducting a child ****ography investigation!

The Subway chain said it believes the investigation is related to the prior arrest of Russell Taylor –a former Jared Foundation executive! 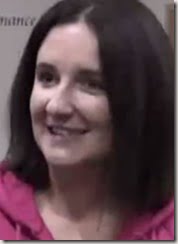 Katie’s man used to be a 425-pound freshman at Indiana University when he embarked on the unusual diet of turkey and veggie subs in 1998.

Giving his overnight fame and what he had achieved, Fogle founded the Jared Foundation to encourage children to develop habits of healthy eating and exercise –and in which Russell Taylor used to work.

According to a 2009 People mag article, Jared popped the question to his then fiancé Katie, the couple had been dating for a year when he asked the big question. At the time he said about Katie:

“She’s been so wonderful and caring. She’s just been the most supportive woman.”

In August 2010 at age 31, she became Jared’s wife. Mrs. McLaughlin attended –as well as her hubby –Indiana University, she is a teacher and met Jared through her friendship with his brother in 2000.

Katie’s man was previously married to Elizabeth Christie Fogle, a nurse. The couple tied the knot in 2001, separated in 2007 and finalized their divorce in 2008. According to the National Enquirer, Jared paid his former wife a sweet amount of money. Today, the spokesman has an estimated net worth of $15 million, according to the New York Daily News.


The former Subway guy is said to have accepted a deal in which he is expected to plead guilty! Court documents say he  is accused of distributing and receiving child ****ography and conspiracy to distribute as well as engaging in illicit sexual conduct with minors.

Several computers and DVDs were seized from the Fogle household last month, as result of an FBI investigation. As for Katie McLaughlin, his wife of 5-years has announced she’s headed to a divorce. According to a statement released to Fox, Katie reveals her next step, following her hubby’s child **** scandal:

“Obviously, I am extremely shocked and disappointed by the recent developments involving Jared. I am in the process of seeking a dissolution of the marriage. My focus is exclusively on the well-being of my children. Neither I nor my family will have any further comment on the matter. I appreciate respect for my family’s privacy during this difficult time.”

Would you choose divorce too?As part of the deal, Fogle would have to pay $1.4 million in restitution–$100,000 to each of 14 minor victims involved in the case.