Meet Jennicet Gutierrez, who has become an overnight sensation after she had the …courage to interrupt President Obama several times during his Pride Month address at the White House on Wednesday.

Obama, clearly not amused told Gutierrez: “Hey, you’re in my house. … You know what, it’s not respectful, when you get invited to somebody,” and got cut off again.

“You’re not going to get a good response from me by interrupting me like this,”  Obama said, but Jennicet wasn’t having it and kept on pressing. Obama –who got visibly irritated, then told her “Shame on you, you shouldn’t be doing this” and asked personnel to removed her from the room. 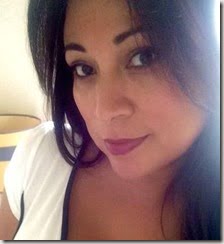 According to a press release from Not1MoreDeportation, Gutiérrez is the  founder of immigrant rights group Familia TQLM.

Gutierrez who was removed after nearly 20 minutes of arguments later wrote: 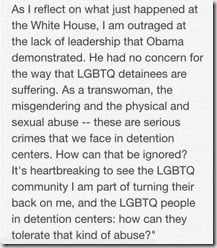 Jennicet strongly opposes the Obama administration’s deportation policies. She could be heard shouting “not one more” and “stop all deportations.”

Obama cleared off by saying: “As a general rule, I am just fine with a few hecklers,” Obama said. “But not when I am up in the house. My attitude is if you’re eating the hors d’oeuvres, you know what I’m saying? And drinking the booze? I know that’s right.” And picked up where left off.

What do you think of Jennicet? You can find her on Twitter here.