Danielle Caesar is the girlfriend of 21-year-old actor, Jake Austin Szymanski. He is a former child actor, known professionally as Jake T. Austin.

Whenever a celebrity is dating someone is quite the big deal, but in Danielle Caesars case is even more of a big deal! She might become a persistence example and an example of hope for many young girls out there!

According to reports, Danielle Caesar is just a simple mortal who tweeted her way into Jake’s heart. She literally went from being his fan to being his gal!

But is not exactly an easy task ladies, it took Danielle Caesar five long years of social media interaction to finally have a shot with the young hunk.

You might recognize his face from his most recent role in ABC’s “The Fosters.” But if you are a big Disney fan, then you know Justin from his role as Max Russoon the Disney Channel series Wizards of Waverly Place, and as the voice of Diego on the Nickelodeon animated series Go, Diego, Go! 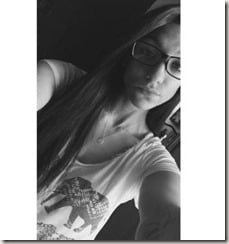 According to the Daily Mail, Danielle Caesar began bombarding Justin T. Austin with tweets in 2009. She was so smitten by the Disney heartthrob she began tweeting him and it went on and on.

Some of the things she tweeted include

‘Is it bad that I wanna kiss you right now? ughh you’re so freaking hot’,

Me and @Jaketaustin are getting married. Shhh =x he just doesn’t know it yet

It was finally in 2011 that she got to meet him at Planet Hollywood NY. Following their meeting he began following her and five years down the road here we are.

Proof of the new relationship was given by Jake himself, who just weeks ago uploaded an Instagram photo locking lips with Danielle Caesar and writing: “I’m crazy for her”

Danielle posted the photo herself and captioned it: ‘Every love story is beautiful, but ours is my favourite.’

Danielle Caesar was born February 23, 1993. She is a NY resident. Justin splits his time between L.A. and NY.

Do you believe in fan-idol love stories?