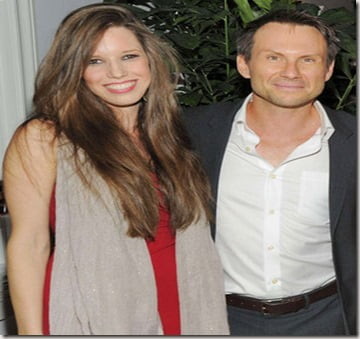 Meet Brittany Lopez, she is the wife of 44-year-old actor Christian Slater. The newlyweds most likely are still in the honeymoon face, having tied the knot just a few months back. The couple dated for three years before getting married.

Lovely Brittany met her 18-year-senior husband when he was staying on Florida’s Little Palm Island a couple years ago. During an interview with Jimmy Fallon, he describes the magical/funny and very unusual moment when he laid eyes on her,

This girl came walking along with another lady, a slightly older lady, and I was sitting in my usual spot eating my oatmeal that morning,” he explained to Fallon. “So I’m a filthy old man eating my oatmeal and she comes walking along. This spot, I guess, was famous for people proposing to each other, actually. It was very, very nice. So she’s there with this old lady and, next thing I know, she gets down on one knee and proposes to this older lady…I’d seen a lot of crazy stuff down in the Florida Keys! I of course was very intrigued and I went over and sat down in my other usual spot.”

“I thought I’d just witnessed a nice ******* engagement so I was coming over to say congratulations,” Slater continued. “But it turns out it was her aunt and she was just trying to help her aunt capture the beauty and the romance of the park…The next thing I knew we were hanging out in the Everglades.” 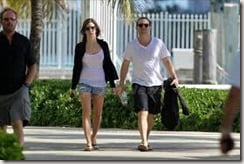 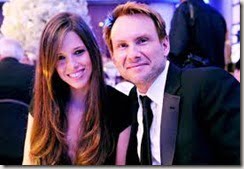 Brittany and Slater said their I do’s on December 2nd, 2013 in Coral Gables, Fla. They wed in front of a judge at a local Miami area courthouse. Brittany and Christian decided to ditch the fuss of the arraignments, so there were no wedding bells ringing, no flowers, no white gown, just their love? We are still hoping for a big ceremony this year, so you never know! Her man first broke the news of their engagement back in February and had planned for an intimate ceremony later in the year but with the actor’s tight schedule it seemed a good idea to do it right then and there at  the Coral Gables District Court. 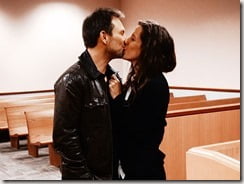 26-year-old Brittany is a business development consultant, in Florida; her hubby was previously married to TV presenter Ryan Haddon with whom he fathered two kids, Jaden Christopher (born 1999) and Eliana Sophia (born 2001). He split from Haddon in 2005.

Brittany’s hubby splits his time between Florida – where the couple live and Lopez works – and Illinois, where Slater is shooting  upcoming ABC’s Mind Games.