Anna Renee 26, and her husband Josh Duggar, don’t need much of an intro. The Duggars, the reality TV family famous for its progeny, oldest son, Josh and Anna tied the knot on September 26, 2008.

Since their marriage, they have expanded the family to three children: , Mackynzie Renee, Michael James, and Marcus Duggar. Earlier this year they announced Anna is expecting their fourth child, a daughter. 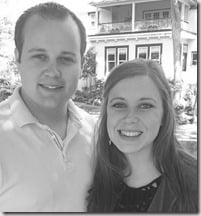 The happy news that they will become parents one more time, has been shadowed as Anna’s 27-year-old husband has been forced to acknowledge he was investigated for molesting underage girls! 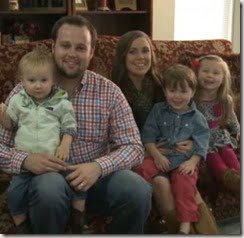 The Daily Mail reports, Josh was named in an underage sexual abuse probe in 2005 and turned in to police by his father Jim Bob after he was caught in a young girl’s room.

Even thought the unfortunate events occurred when he was a teenager in Arkansas, he owned what he did after InTouch magazine published a story earlier this week, about police records it obtained from Springdale, Ark., hidden since 2006.

The records show Josh Duggar confessed to his father, Jim Bob Duggar, to multiple *** offenses, including forcible fondling of breasts and genitals, against five underage girls. Jim Bob Duggar, then waited more than a year before contacting police about what his then 15-year-old son had done.

As a result, resigned his job at the Family Research Council in Washington, one of the leading conservative groups fighting abortion and gay marriage among other causes. He apologized and their parents also wrote a joint statement.

According to People magazine, Josh told Anna about his past mistake two years before he proposed and she has remained supportive of her husband.

Anna Renee’s husband signed up using a credit card linked to a billing address that matches his grandmother’s home in Fayetteville, Ark., according to Gawker.

This new scandal comes after hackers called The Impact Team published the data to the so-called “Dark Web,” they accused the site of being a fraud and threatened to expose users if it wasn’t shut down, the NY Post reports.

What would you do after your husband and baby daddy has been accused of molesting minors and has also been caught looking for love online? Comment below!