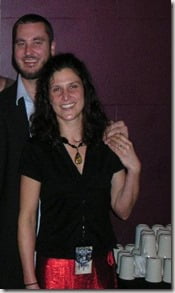 Meet Aaron Chapman, he is the husband of Renee Radziwon Chapman; a devoted wife, mother, and advocate for animals who was tragically killed over the weekend after the 36-year-old was attacked while in a pen filled with cougars.
Aaron’s wife worked at WildCat Haven as a animal care specialist who dealt with these animals on a regular basis. It’s not yet known exactly what went wrong but she was already killed by the time help arrived, according to media reports. According to records online Aaron was born on January 01, 1970. He lived in Idaho Falls, ID from 2003 – 2009 and then in in Portland, OR since 2010. Both Aaron and his beloved wife were involved with the non-profit organization WildCat Haven. His LinkedIn says he was a Project Coordinator at WildCat for four years. He managed schedules to ensure projects were completed on time and within budget, was proactive in disseminating project information to all stakeholders and cooperate in the development of marketing strategy for all future projects. He also manage day-to-day operation aspects of small work projects and create both short and long term fund development strategy.

Chapman worked at WildCat Haven up until May this year.

Aaron also worked as an account manager for CollegeNET, Inc which is a Computer Software company based in Portland, Oregon. Prior to that he was a sales rep at Aviall Inc.; where he perform all aspects of Sales and Account Services, gave service 200 accounts including Corporate, Airline, General Aviation, and Brokers and develop new accounts through acquired sales processes for over seven years. The New Mexico State University graduate Aaron, and wife had welcomed their first child just a few months ago, a little baby girl. The picture above is him with his beautiful new baby girl, Noa.

This is a fragment of a tribute written by Aaron honoring the memory of one of the Wild Cats he and wife Renee cared for:

Mac, a tiger, came from Wild Animal Orphanage in Texas. Due to previous corrupt management, the facility could no longer afford to care for the animals and had to close down. There were over 400 animals that needed to find new homes. Mac and Shirley, his sister, were two of over 70 big cats that needed placement. With 55 tigers alone that needed sanctuary, we knew that we had to help.

Mac and Shirley arrived at at WildCat Haven on October 10, 2010. Mac came to us with a sore on his side that had gone untreated for several months. He underwent  surgery to remove it, and the biopsy came back, Fibrosarcoma. We were devastated but  decided to  do all we could to give Mac the best chance at survival. We had a second surgery done in Los Angeles and the results came back much more favorable.

Mac and Shirley shared a huge enclosure complete with perches, logs, trees, and lots of space to run and play! We were thrilled to be able to give these two tigers a true lifetime home.

Unfortunately, as all too often happens, Mac’s cancer returned in 2013.

His wife’s death has caused controversy on how WildCat Haven quickly moved to pin all the blame on this deceased lady by saying she didn’t follow protocol when entering the pen.

The Family responded with a statement about their great loss, saying

Her passion, spirit, kindness, and warmth were felt by all who knew her. Renee’s life was taken so suddenly and tragically while doing the very thing that she cared so much about, tending to and caring for wild cats.

A Support page has been created by Aaron where you can donate and show some love to this family, you can also read the family statement here.

We send our deepest condolences to him and the rest of Renee’s family.

Fin Aaron on twitter here and his LinkedIn profile here.