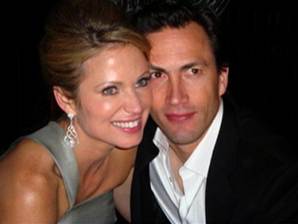 Amy Robach announced on Good Morning America that she has breast cancer and will be undergoing a double mastectomy on November 14. She also revealed that upon receiving her diagnosis, her family – including her husband, actor Andrew Shue, flew to be by her side and they began “gearing up for a fight.” Her mastectomy will be followed by reconstructive surgery.

Amy’s husband was on the popular TV series, Melrose Place and played Billy Campbell. He was born on February 20, 1967. Besides being an actor, Andrew was for a time a professional soccer player. He and Amy met Shue met on April 2009 at a book party; by September they were engaged. They were married on Amy’s 37th birthday, February 6, 2010 at The Lighthouse at Chelsea Piers.

The reporter recounted the fateful “GMA” assignment she received early in October that would eventually save her life. As part of Breast Cancer Awareness Month, Robach underwent a mammogram live on television, but she admitted to being reluctant to have the medical screening.

“Between flying all over the world for work, and running around with my kids to school and ballet and gymnastics like so many women, I just kept putting it off,” she said. Another reason she gave was that in her family there is no history of cancer.

She is lucky to have her family with her to support her, especially her husband Andrew, who is sure to be a great source of strength to her.

Please be aware that there is no real reason to put off or delay a mammogram. This simple procedure can really save your life. We wish Amy a full and speedy recovery.