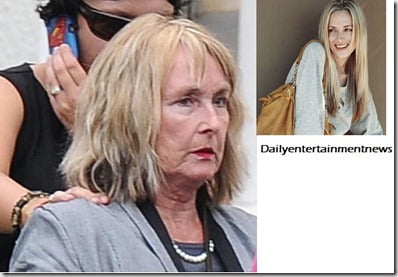 The parents of Reeva Steenkamp, who was murdered by her boyfriend Oscar Pistorius on Valentine’s Day, are Barry Steenkamp, a horse trainer and his second wife June. They said they are aware of the court appearance of Pistorius on Tuesday, but will not be making public comments on the matter. Reeva’s parents made shocking statements in a documentary which is set to air tonight, a day before their daughter’s killer appears in a pre-trial hearing.

June Steenkamp says her daughter told her she and Pistorius were arguing frequently in the weeks before her death, and that she was afraid of being with him.

The Steenkamps also revealed a picture painted by Reeva, as a teenager, illustrating a gunman, an angel and a stairway to heaven, which her parents described as a ‘premonition.’

Reeva’s mother, June Steenkamp, recalls a phone call from her daughter while travelling in a car that Pistorius was driving.

“She was afraid, she was so afraid.” June Steenkamp said. “She phoned me and she said, ‘Mummy I’m in the car with Oscar and he’s driving like a lunatic’. So I said will you just give him the phone.”

“She gave the phone to Oscar straight away and I said hello. And he said “Mrs Steenkamp.” ‘I said, listen, if you hurt my baby in any way I will have you wiped out. I didn’t mean murder him, I’m just saying, that’s what I said. And I know the friend that was in the car was a friend of Reeva and a friend of Oscar and he told me afterwards that Oscar slowed down immediately.”

In the interview to be aired tonight, June Steenkamp discusses the guilt she and her husband feel about not having ‘protected’ their daughter.

“Why? Why did he shoot her? I want to know why he shot her. Because she must have been so afraid in the toilet, and somebody’s firing gun bullets through the door.”

26-year-old Pistorius is due back in court tomorrow.