Christina Mauser has been identified as one of the passengers who died Sunday -in a helicopter accident along with NBA legend Kobe Bryant.

Christina Mauser, is one of eight others who died in the tragic helicopter crash that also killed Bryant and his 13-year-old daughter Gianna Maria Onore Bryant.
A total of nine people were on board a helicopter that crashed into a hillside in dense fog in Calabassas, California. Bryant’s sudden death at age 41 touched off an outpouring of grief for an athlete whose star status transcended the sport.

According to reports, the passengers who were all linked to basketball in one way or another -were on their way to a game when the chopper went down. The helicopter is said to had been flying in foggy conditions considered dangerous. 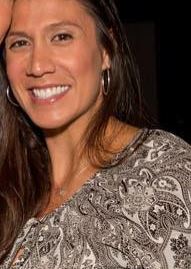 Christina Mauser who is survived by her husband and their children -served as an assistant coach for an Orange County private elementary school basketball team.
38-year-old Christina Mauser was a California native who attended Edison High School, where she played on the Chargers.
She was a basketball coach at Harbor Day School in Newport Beach. In addition she also coached Gianna Bryant at Mamba Sports Academy, where the girls were part of the Los Angeles Lady Mamba team, founded in 2018 by Kobe Bryant.

According to her social media, Christina was a resident o f Huntington Beach, California -where she lived with her family.
Her husband confirmed on Facebook that she died in the helicopter crash, he wrote “My kids and I are devastated. We lost our beautiful wife and mom today in a helicopter crash. Please respect our privacy. Thank you for all the well wishes they mean so much”

Christina’s husband, Matt Mauser is an entertainer and vocalist who has been active in the industry since the late 90’s. He is known as the lead singer of the popular Southern California rock band ‘The Tijuana Dogs’ and is also the star of the Frank Sinatra Tribute Band, the Sinatra Big Band show.
The couple celebrated their 14th year anniversary in 2019 and shared three children together; a boy named Tommy and two girls, Penny Rose and Ivi.