Sam McInerney is the boyfriend of TV and film actress, Kennedy McMann -whom you may recognize from The CW show, Nancy Drew.

Sam’s girlfriend grew up being a fan of the Nancy Drew novels and also a big fan of videos games.
Born October 30, 1996; Kennedy is the daughter of Lisa McMann, author of a number of suspenseful paranormal and fantasy YA novels. Kennedy earned her BFA in Acting from Carnegie Mellon University. She made her television debut in 2017 when she starred as Sara Moreland on the series Gone.
She is also known for having starred in episodes of Law & Order: Special Victims Unit and Gone and for her passion in playing Dungeons and Dragons.

The lovely blonde is currently in a relationship with fellow actor boyfriend, Sam McInerney. The two have been engaged since December of 2018. On the wedding date Kennedy wrote on Instagram when reminiscing about their engagement ‘we’ll get married when we have five seconds to plan something’ 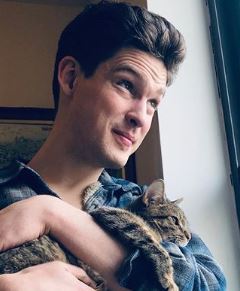 Like his leading lady, Sam McInerney went on to study drama at Carnegie Mellon University School of Drama. He graduated with a BFA in Acting in 2016.
According to his social media, Sam is originally from Cave Creek, Arizona. Samuel who obliviously goes by Sam -also enjoys cooking for McMann -who shares the occasional photo of her man.
Unlike Kennedy, Sam McInerney seems to enjoy a low profile and doesn’t appear a big fan of social media.
According to his profile on Carnegie Mellon -his skills include Music Production, Guitar, Drums, Writing. A freelance writer profile says he ‘has extensive experience in product description writing, nutritional writing and blogging’
His theater experience includes playing roles in a number of production such as The Tempest, The Comedy of Errors, Fool for Love, The Things We Do to Survive Youth, Anthony and Cleopatra and The Plague in Venice.