Laura Gerken is the daughter of politician, Pete Gerken -who is a Democrat county commissioner in Ohio.

Laura’s father has been a Lucas County commissioner since 2005. But is not her father making headlines these days; according to reports Laura was recently arrested and charged with on disorderly conduct while at a President Trump’s rally in Toledo.
Laura is said to have engaged in a physical fight with another person, a total of three were arrested.

Her father has was reelected to a fourth four-year term in 2016. Pete is currently serving as President of the Board of Lucas County Commissioners. He has also served as President of the Board from 2009 to 2013.
He previously served on Toledo City Council for 8 years and chaired the Environment, Utilities, and Public Service Committee.
After graduating from University of Detroit Mercy; Pete started working on the assembly line at Jeep in 1976. He became a union rep for UAW Local 12 in 1985 and worked his way up through union leadership during his 30 years at Jeep, retiring as the Administrator at the National Training Center in Holland. 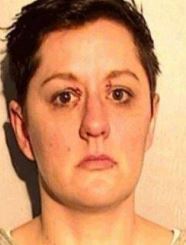 In addition to Laura, Pete Gerken and wife Polly are also parents to her siblings, Christopher, Joshua and Cindy.
36-year-old Laura Gerken who was protesting outside the Huntington Center, where President Donald Trump spoke -ended up being arrested on Thursday night. Laura who allegedly got into a physical altercation is also accused of yelling obscenities and resisting when officers placed her under arrest. Her dad, issued a statement following her arrest:
“All Americans have the right to free speech and to exercise their right to express their opinions,” Gerken said. “The Toledo police department and all law enforcement professionals did a great job yesterday protecting everyone’s safety in the downtown area. Like so many other Americans, we feel strongly about the views of President Trump. We will deal with this issue as a family.”