Miles Elliot is the boyfriend of Sophia Grace Macy -best known as the daughter of actors, Felicity Huffman and William H. Macy.

Miles’ girlfriend was pretty much put on the map by her famous parents, and we just don’t mean it in the literal way but also when her parents infamously got her SAT rigged by Rick Singer in last year’s college admissions scandal.
As a result, last September a federal judge in Boston ordered her mother, to serve 14 days in prison.

But is good news for the 19-year-old who is set to appear in season 2 of the hit series “The Twilight Zone” which was recently revived by Jordan Peele. According to reports, Sophia will make her ‘Twilight’ debut in an episode called “Among the Untrodden.”
The pretty blonde has had a couple of roles. According to her IMDb, she appeared on The Layover (2017) and Aurora (2017). However, those were small roles so is safe to say Twilight will count as her big break.
Sophia who’s also been pictured as her dad’s date at the 2019 Golden Globe awards is currently in a relationship with a guy named Miles Elliot. 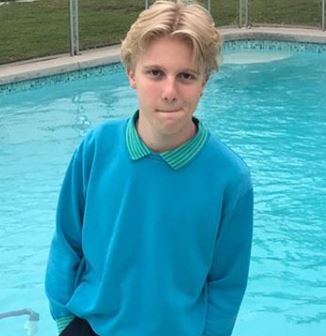 Elliot is no stranger to the industry, he happens to be a fellow actor and is currently a student at the University of Michigan, where he is pursuing a BFA in acting and is due to graduate in 2023.

Elliot was born August 21, 2001; the California native began acting before he turned double digits in age. According to his IMDb, he’s had a couple of roles including 2013’s Camp and Bukowski, and 2014’s Cooties and Dawn Patrol.

He was a 2020 theater finalist at the National Young Arts Foundation out of Los Angeles County High School for the Arts. While in high school he was the lead in numerous local stage productions, including one in which he played Charlie for You’re a Good Man, Charlie Brown.