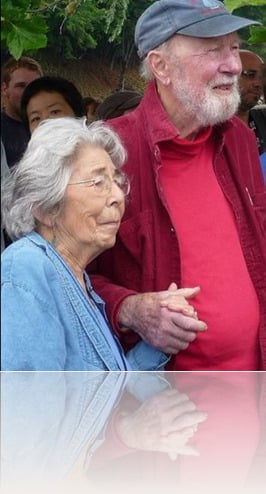 Pete Seeger, 94, an activist who became famous for turning folk music through peripatetic entertaining and prolific songwriting, once said his dear wife Toshi Seeger was the brains of the family, she was 94 when she passed away on July 9, 2013, nine days from their 70th wedding anniversary. Pete’s wife was born Toshi Aline Ohta on July 1st, 1922 in Munich, Germany to Japanese father Takashi Ohta and an American mother Harper Berry, Toshi’s grandfather translated Marx into Japanese, he was exile from Japan for his involvement with the Government’s left party, but Toshi’s dad Takashi offered to take his father’s place in exile, something that was permitted under Japanese Law. Toshi didn’t remain in Germany for long, her parent moved to Greenwich Village  where she attended at the Little Red School House and graduated in 1940 from the High School of Music Art.

A year earlier Toshi had met a handsome man at a square dance name Pete Seeger, they man she got married with on July 18, 1943, at that time Pete didn’t have enough money to get his bride a proper wedding ring, so he borrowed  some cash from his grandmother. Toshi and Peter were blessed with the birth of their three adorable children, Daniel, Mika and Tinya.  They lived in a log cabin with no water or electricity. Toshi  a Folk musical film maker of the 1966 film Afro-American Work Songs in a Texas Prison and folk song writer and executive producer for her husband’s Emmy awarded Documentary by PBS “Pete Seeger: The Power of Song.” She also produce hundred of his concerts, she co-founded  the Hudson River Sloop Clearwater ,  The Great Hudson River Revival, aka Clearwater Festival.