Meet Ken Morrison and his lovely new wife Richelle Lee Ann from Alberta, Canada; the couple that on their wedding day got to meet rock legend Steven Tyler.

Reports say Morrison and his wife had just finished taking photos at the Fairmont in Edmonton, Canada when they got in an elevator and spotted a collarless pooch all alone! The lost Yorkie happened to be Tyler’s property!

They decided to take the doggy to the front desk when all of the sudden the elevator doors open only to bump into Steven who was holding his other dog.

According to Morrison, the Aerosmith lead singer yelled, “***. You found my dog!” — and the groom replied, “***! You’re Steven Tyler!”
The newlyweds got to spend the next 15 minutes chatting with Steven –who even posed for a memory photo. Isn’t that the coolest wedding story ever! 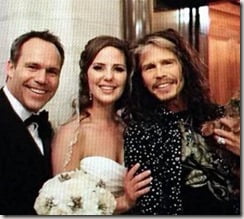 Ken is a Re/Max realtor in Spruce Grove, Alberta; on the website it says Ken is in charge of the Edmonton, Saint Albert, Stony Plain, Spruce Grove and County of Parkland areas and specialize in New Construction, Farm & Land, Investments, Relocation, Luxury Homes, Residential Acreages, Development Land and Condominiums.

According to his LinkedIn, he’s been a realtor for RE/MAX Real Estate for over 13-years and is pretty good at his job having won several awards.

The lovely bride, Richelle, now Mrs. Morrison shared the epic image on Facebook saying: “It was a really awesome moment to add to our special day.”