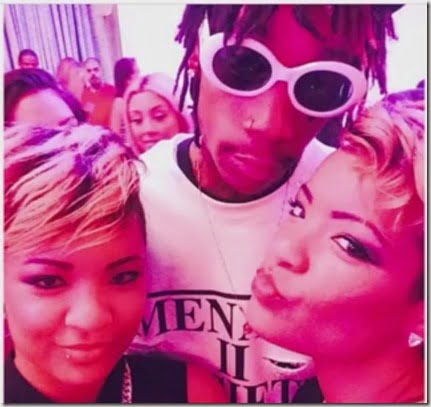 Whoa! Double drama for Wiz Khalifa in the form of hot twins! After we were all baffled by the sudden split between the 27-year-old rapper and his model wife of one-year Amber Rose 30, we’ve learned the reason of their separation!

Rumors of infidelity on both sides rapidly were fired off when a close friend of Amber Rose alleges the model walked in on Wiz Khalifa with twin sisters Jas and Ness Rose!

Monday, reports suggested that the rapper was linked to twins that go by the Instagram name of Jasandness after he posted a cropped photo of a woman wearing a “Psycho” sweat shirt on Instagram with a caption, “Are you crazy” Sunday. So here is what we know about them. Jas and Ness are identical twins and they are also pretty much inseparable!

Their style is always impeccable as good fashion designers they take good care of their image. On that not its obvious by their photos When they’re not hard at work on their up and coming clothing line, these two like to party the night away. The twin –who have younger siblings –describe themselves as personalities and fashion designers in the entertainment industry, are the creators of “New Vintage”  which they describe as “A collection of pieces conveying the messages of today’s pop culture that intend to portray an image to the generations ahead. New Vintage is for the visionary, eclectic customer. Our mission is to capture the spirit of the generation and allow it to be free once the ture individual within them is realized”

Jas and Ness who are always at the hottest spots in L.A have expensive taste in clothes, booze and guys. Other reports describe the twins as hip hop groupies who have “partied” with the likes of Chris Brown and Kanye West.

Rose filed for divorce from Khalifa last week. The couple, who started dating in early 2011, married last July, five months after the birth of their son, Sebastian Taylor Thomaz.

According to Amber’s friend, radio host Peter Rosenberg –who revealed that Amber had walked in on Wiz with two women –the couple had been having issues but she hoped to work things out until the twins deal happened.