This is an old news with a new face; gorgeous Colombian Paola Builes Aristizábal was stripped of her crown after pictures of her emerged on a skimpy swimsuit. Paola is certainly not the first beauty queen to go through the shame of giving up her crown, but she sure is the latest girl to face the scandal.

The 21-year-old was named Miss Antioquia on Aug. 10, and that qualified her to compete for the Miss Colombia Crown, according to Bluradio.

Just days later the inappropriate photos emerged. The organizers labeled the images of her in a bikini as “too small.”

As a result  she cannot continue on to the Miss Colombia pageant and claims she’s been ‘discriminated’ against. 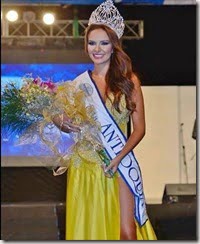 The images of her wearing the two-piece swimsuit were leaked by fans of a rival wannabe beauty queen, the New York Daily News reports. Organizers said they felt the shots were “inappropriate” and breached competition rules against being pictured in a bikini below a certain size.

Her crown was then given to Natalia Ochoa Calle. Builes -who is holding her head-up-high- said she felt “discriminated” against and claimed the photographs had been online for “at least two years.” Her family said she even turned down a lucrative modeling work to not jeopardize her chances in the competition. 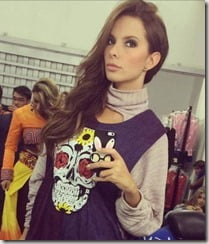 The statement kicking her out of competition reads

Miss Antioquia Paola Builes Aristizábal, who was elected on August 10, will not be able to exercise her functions as queen of the antioqueños. This decision was taken after consultation with the Board of the National Beauty Pageant in Cartagena, prompted by photos of the participant in lingerie, which [the organization] was not aware of until one day after the evening of election and coronation. 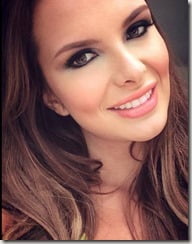 This is a story we’ve seen one too many times, do you see any pattern in these girls?