Rebecca Crews famous husband is former NFL defenseman turned actor, Terry Crews. You might know Terry from his many humorous film and TV roles but its impossible not to recognize him from his entertaining Old Spice commercials.

Terry is currently making headlines but not exactly for any of his professional projects. He posted a series of videos to Facebook, confessing to his addiction of ****ography. He also released a book in 2014 which says his addiction began at age 12 and that it almost ruined his marriage.

Terry was born in Flint, Michigan, in 1968. From a young age, he showed an interest for the arts and a special skill for drawing. He graduated from Flint’s Southwestern Academy before earning an Art Excellence Scholarship to attend the prestigious Interlochen Center for the Arts.

But Terry also excelled in football, which then earned him a full scholarship to play football at Western Michigan University, where he was an art major.

Terry was drafted by the NFL’s Los Angeles Rams in 1991. After several years playing pro football, with stints in the San Diego Chargers, the Washington Redskins, and the Philadelphia Eagles; he retired in 1997.

Crews then pursued an acting career and had previously worked as an sketch artist. He first appeared on the big screen in 2000’s The 6th Day. Many film roles have followed, among them those in White Chicks (2004), The Expendables (2010) and its sequels, and Bridesmaids (2011). Crews has also found success on the small screen, having recurring roles on Are We There Yet? (2010- ), Arrested Development (2013) and Brooklyn Nine-Nine (2013- ). Also known for his role of Julius on the UPN/CW sitcom Everybody Hates Chris. In 2010 Crews launched The Family Crews, a reality series starring his whole family, premiering on BET. 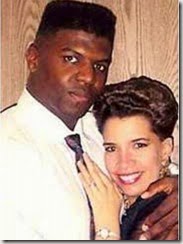 Rebecca Crews was born Rebecca King. She and her hubby have been married since 1990. She is the mother of the couple’s four children. Rebecca King met Terry Crews while attending Western Michigan.

Rebecca and Terry have three daughters: Azriel, born in 1990; Tera, born in 1999; and Wynfrey, born in 2004; they also have one son, Isaiah, born in 2007. Rebecca is also the mother of daughter, Naomi Burton, from a previous relationship with ex-husband, Charles Burton. 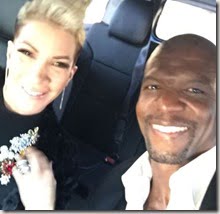 Rebecca Crews, is also successful on her own. A former beauty queen and Christian recording artist, also describes herself on social media as Songwriter/ Producer/ Mother and Wife!! Jesus Lover.

Rebecca told  her hubby and father of her children, she was leaving him due to his addiction to ****. The mom of five, said she didn’t know him anymore and that’s when Terry got help, six/seven years ago according to the revealing videos –which have amassed over 45,000 likes.

Accoridng to Rebecca’s website, she was born to an interracial couple in Benton Harbor, Michigan, and raised in Gary, Indiana, where she attended various schools She graduated from Lew Wallace High School at the top of her class and was crowned Miss Gary 1984 during her senior year!

She went on to study musical theatre at Western Michigan University and performed regionally with various productions, plays, and musical acts. Throughout high school and college, Rebecca appeared in various musical theatre productions, The Wiz, Oklahoma, Pippin, The Music Man, Evita, and others. She also starred as Deena in a regional production of Dreamgirls for the Black Civic Theatre. She also created her own gospel group The Chosen Ones where she served as singer, songwriter, and producer.

In recent years, Rebecca has been featured in several magazines and is also a sought after speaker and lecturer on youth, family, and fame.

You can find lovely Rebecca Crews on Instagram here.