Austin Wilson is the hunky new guy in the life of singer, songwriter and actress Demi Lovato -and it seems serious as she made it Instagram official.

Austin and Demi both posted the same romantic photo of they kissing on each other’s Instagram and captioned it with heart emojis.

Lovato -a two-time Grammy nominee -has dated some famous names including Joe Jonas. She and actor Wilmer Valderrama dated for nearly six years before their split in 2016. She later dated MMA fighter, Luke Rockhold. Most recently Lovato was romantically linked to Bachelor Nation’s Mike Johnson. The two sparked romance rumors in September but sources revealed their “fling fizzled out” in October.
The new guy, Austin Wilson -may not be as famous but he is certainly on his way. 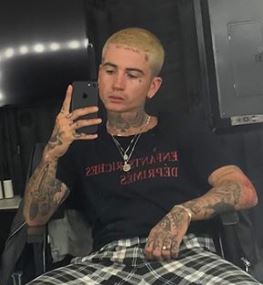 Austin Wilson, is the son of legendary skateboarder turned designer and businessman, George Wilson -who used to be one of the Z-Boys and now has a clothing line called Rivi Goods.
Austin Wilson is making a name for himself in the modeling industry. He shared one of his campaigns on his Instagram, when he modeled for a skincare line.
He was a close friend of late male model, Thomas Trussell III, who tragically died after a battle with addiction in October.
Wilson who seems close to his family as he often posts about both his parents, is also a big fan of body art. The 25-year-old has several tattoos across his upper body including both his arms, chest and neck -which shows off on his Instagram regularly.

It’s unclear how Austin Wilson and Demi came to be or how long have they been dating, however reports suggest they may have been introduced by mutual friends as they run in similar friendship circles.