Velida Kitaina is the lovely wife of diplomat, George Kent who currently serves as the Deputy Assistant Secretary in the European and Eurasian Bureau at the U.S. Department of State.

Velida’s husband has made a career working at the State Department, he’s held a number of roles including Special Assistant to the Under Secretary of State for Political Affairs; Operations Center Watch Officer; and Thai desk officer.
He is the former Deputy Chief of Mission in Kyiv, Ukraine and previously served as the Senior Anti-Corruption Coordinator in the State Department’s European Bureau.

According to his state.gov bio, Kent is highly educated. He attended Harvard where he studied Russian History and Literature. He also holds an M.A. from Johns Hopkins’ SAIS and an M.S. from National Defense University’s Eisenhower School. In addition he speaks mutlitple languages including Ukrainian, Russian, Thai, German, and Italian.

Though Kent has been making headline as a witness in the impeachment inquiry into president Trump -his wife leads a low profile. 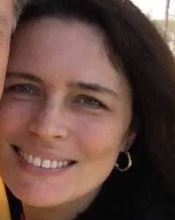 Velida Kitaina has been married to George Kent since 1996. Together they are the proud parents to three children, daughters Elina and Jana and son, George Jr.
Elina works as a staff writer for the Kyiv Post in Ukraine while George is currently attending Harvard. Youngest child, Jana, is a high school student.

According to a Facebook post from the U.S. Embassy in Kyiv, Ukraine; Velida Kitaina was born in 1970 in Uzbekistan, north of Afghanistan. The 49-year-old who has has Crimean-Tatar roots -is a teacher and educator.
Velida Kitaina Kent has a license to teach in Virginia. According to the state’s Department of Education website, Kitaina has a master’s degree. Her profile reveals she is trained to teach elementary education from preschool through sixth grade. She is also certified to teach English as a Second Language through high school.
According to a LinkedIn page, Velida Kitaina has worled as a substitute teacher since 2011. She is also listed on the staff directory for Arlington Public Schools in Virginia.