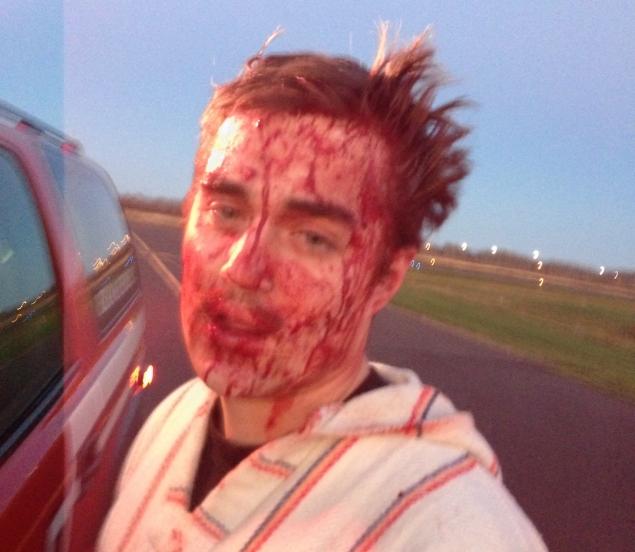 Matt Fandler, 23, is one very lucky guy! He is the pilot that escaped death by parachuting out of his plane after it had been hit by another. Even he finds his survival unbelievable.

In an interview on Dateline, he gave the story. With his face still covered in cuts, he explained how he and the parachutists survived the mid-air collision. The jumpers were poised to jump when the accident occurred. Matt yelled GO! and tried to see if he could regain control of the plane. When he realized that that wasn’t possible, he decided to grab a parachute and jump, even though he was not an experienced jumper. In fact he had only jumped twice before, and this was his first solo jump! All this happened over the skies of Superior, Wisconsin, and was captured on skydivers helmet cams. Unbelievably, all nine divers and the two pilots survived.

Matt was the only one sustaining injuries, which came from flying glass at the moment of impact. Apart from the cuts on his face, he needed 25 stiches to repair the cuts and bruises to his body and arms.He says his landing was “decently hard” but he was able to watch as the pilot of the other plane that survived the impact land safely on the airfield.

Among the skydivers that were there that day are: Barry Sinnex, Patricia Roy, Daniel Chandler, Mike Robinson and Amy Olsen. All nine of them said that they were not going to give up skydiving and one woman said she was more afraid of spiders. Blake Weldan was the pilot of the other plane.

Believe it or not, Fandler said he plans to fly again and hopes to move on to bigger and faster aircraft!