Marc Tomblin is the name of the new guy in the life of TV personality and author, Wendy Williams.

Marc and Wendy were first spotted last week after the 54-year-old was waiting in the car with him while ordering take out. Since then, the two have been hanging out closely, most recently doing some serious shopping in New York.

Mar’c famous gal has been making the headlines after she filed for divorce from husband Kevin Hunter on April 11 after 22 years of marriage. Apparently, according to sources Williams was fed up with Hunter’s alleged cheating.

But her family drama took a turn for the worse when a few weeks later, the couple’s son Hunter Jr., was arrested after getting into a fight with his father. 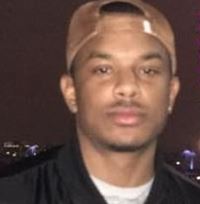 Marc who is now based in Los Angeles, is a financial manager, who specializes in bond investing. According to his LinkedIn, he escribes himself as an investor and asset manager, focuses on non-performing notes in the real estate field.

He sounds like a great dude, however he also got himself in trouble with the law a while back. According to court records, Tomblin pled guilty to conspiracy to commit robbery with a dangerous weapon in Charlotte back in 2013. Police say he was part of a group of 3 people who robbed a man at gunpoint. He was sentenced to 15-30 months.

Should Wendy be concern about her new friend’s criminal history? Apparently not because she is well aware of it.