Jerad Christian is the boyfriend of blonde TV host and political commentator, Tomi Lahren. The 24-year-old ‘agitator’ and the handsome Jerad have been dating since February 2015. Keep reading to know more about Jerad Christian.

She is currently the host of “Tomi” at 7pmET on TheBlazeTV –where she is seen in fearless fashion, famously taking on the Left.

The South Dakota native and UNLV political science and journalism grad previously hosted One America News Network’s On Point with Tomi Lahren and ” Let’s do this, America!”

While at University of Nevada she hosted the school’s political roundtable show The Scramble.

She was born August 11, 1992 and was raised into a military family. She got her start on TV at age 22, after she was offered her own show at OAN. On Point debuted in August 2014.

Before landing her own show, Tomi interned for Republican congresswoman Kristi Noem, serving as the first intern for Noem’s Rapid City office.

The Liberal agitator, was on a recent interview with Trevor Noah –in which things got confrontational.

“Why are you so angry?” Noah asked Lahren to start after showing a clip of the conservative host for TheBlaze railing against protesters of President-elect Donald Trump in the days after Trump won the election.

After saying she wasn’t actually angry, Lahren said, “Sometimes people just need to be called on their s—.” Check out the rest of the interview here.

This of course isn’t the first time Tomi gets bold with her comments. How can se forget when she got caught up in a controversy after criticizing the performance of Beyonce at Super Bowl 50. 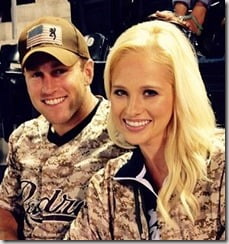 Jerad Christian happens to be a hunky  military officer. The blonde fella is a graduate of the United States Naval Academy in Annapolis –scoring the ‘highest’ in all the tests.

26-year-old  Christian completed SEAL training in November 2014. That same year he was deployed to an undisclosed location, his first deployment.

He and Tomi met during a night out in San Diego. Close ties to Tomi told the Daily Mail, she was really proud of him, for fighting for their country.

Jerad hails from Utah. He was based at the Naval Amphibious Base Coronado in San Diego.
He is described by friends as a ‘humble guy’  a ‘God’s gift to Navy SEALs’, he is very talented, but he’s a very humble guy, quietly confident,’ the friend told the Daily Mail.