Sheri’s husband recently announced he is considering an independent campaign for president in 2020, but not everyone is on board with it.

Her longtime husband is best known for being the former CEO of the coffee giant, Starbucks. Schultz was born July 19, 1953; the New Yorker grew up in the public housing projects of Brooklyn and was the first member of his family to attend and graduate college. His family’s situation was so precarious that his parents could not attend his grad ceremony at Northern Michigan University. 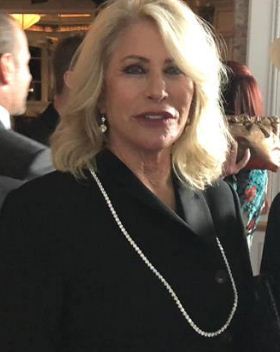 After college, Howard got a job selling office equipment door-to-door. He had other jobs until he landed one for a European company that made housewares. One of their customers was a small coffee company in Seattle, Washington, named Starbucks. A year later he was working for Starbucks. He turned a regional coffee company into one of the world’s top brands.

He spent a total of thirty-six years at Starbucks, in June 2018, Schultz stepped down as executive chairman and board member of the company he joined in 1982. He is now chairman emeritus.

Howard and his wife have been married since 1982. The couple had met during the summer of 1978 –during a trip with friends to the Hamptons.

Together they have two adult children, son Jordan and daughter, Addison. Both of their children are now married. Addison who graduated from N.Y.U., from which she also received a master’s degree in social work –tied the knot in 2017 to Tal Hirshberg.

Jordan Schultz –who graduated from Occidental College and works as a sports columnist –is married to wife, Breanna.

Sheri Kersch grew up in Lima, Ohio; she attended the University of Denver and graduated with a Bachelor’s degree in Political Science.

She is well known for her philanthropic efforts, especially with at-risk children. The reason why in 1996, Sheri and her husband founded the Schultz Family Foundation, which invests in training and hiring veterans and youths.

Sheri Kersch Schultz serves as the foundation’s president and co-founder.