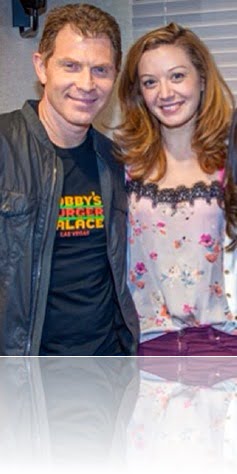 Last week we heard chef Bobby Flay and his actress wife Stephanie March were getting a divorce, things got ugly when she said he cut off her credit cards and things might get uglier after it was revealed Flay had an affair with actress and young aide Elyse Tirrell.

According to the NY Post they spoke to actress/writer Maia Madison who is a good friend of Mrs. March and she told them about how she found out Bobby Flay had been having an affair with Elyse Tirrell for the past three years.

“She came to my house and was sobbing uncontrollably,’’ Madison recalled. “She said, ‘I can’t believe the last 10 years of my life have been a lie.’

“Elyse had always seemed so nervous when Stephanie came to one of the restaurants, and Stephanie, not knowing what was happening, went out of her way to compliment her and try to make her more comfortable. Elyse had even been to Stephanie’s home when she was there — and when she wasn’t.

“Now this girl is about to ­become the Monica Lewinsky of the food world.” 29-year-old Elyse K. Tyrrell from Freehold, New Jersey is the daughter of Marie and Anthony Tirrell both from Jersey and also the proud parents of Elyse’s older sister Jill Tirrell now Jill DeMairo, 36.

Elyse graduated from the American Academy  of Dramatic Arts, dotted with a great voice Ms. Tirrell sang the Rainbow at the Land of Oz Theme Park on Beech Mountain in Banner Elk, NC and played Elphaba in the Universal Studio Japan’s Production of WICKED. Elyse lived in Japan  for quite some time, singing and acting, when she came back she became a hostess at Bar American in 2008, and joined Bobby Flay’s B-Team four years later.