Catherine Pugh was until recently the Mayor of Baltimore, it appears the 69-year-old politician has stepped down due to corruption investigations.

Mrs. Pugh is said to have resigned amid FBI investigations into lucrative business deals for her self-published children’s books.

Born March 10, 1950; she is the second of seven children born to James and Addie Crump. Her father, a union laborer in a rubber factory, and her mother, a homemaker.

Catherine who was born in Norristown, Pennsylvania, but has spent most of her career in neighboring Maryland –attended Morgan State University, where she completed both her undergraduate and graduate studies.

After graduation she worked at Equitable Trust Bank, where she started as a branch manager trainee, graduated to branch manager, and then worked as a credit analyst.

When it comes to jobs, she’s done a bit of everything. At one point she has been a print journalist, a talk show host, the dean of Strayer Business College (now Strayer University) in Baltimore, and director of citizen’s involvement under Mayor William Donald Schaefer. She also served as president and CEO of her own public relations firm and a co-owner of a high-end consignment shop in Pigtown called 2 Chic Boutique.

She was elected to her first office, Baltimore City Council, in 1999. 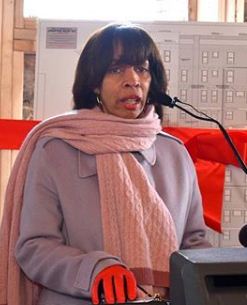 Pugh was elected to the Maryland State Senate as a Democrat in 2007. She was named the Democratic nominee for Mayor of Baltimore in 2016. She took office in December of 2016.

In addition, Catherine Pugh –a fitness ethisuast, is the author of three children’s books and a book of poetry. She sits on the boards of numerous institutions and nonprofits, including the Baltimore Design School, which she co-founded.

She was once married but it didn’t work out, she and her mystery husband got a divorce and did not have any children together.

According to an obituary, she was married to the late, James Pugh –who died in 2011. James was educated in the Manning, South Carolina Public School system. He was a United States Army vet who also fought in WWII.

He married a second time to Doris Pugh with whom he had five children Janice, Annette, Francine, Doris and James, Jr.