For those who watched Jeopardy! Melissa’s hubby needs no introduction. James has shattered show’s records, winning more than $1 million since starting his run on the show in early April.

Melissa’s husband has the second-longest winning streak in Jeopardy! History –bagging 21 games in a row. Holzhauer won $80,615 in Thursday’s game, bringing his total winnings to about $1.6 million, according to Jeopardy!‘s results. How long Holzhauer will continue his winning streak? Who knows but it sure is worth to keep watching to find out.

In the meanwhile, James is doing life with wife, Melissa, they are Las Vegas residents since 2015.

Melissa Holzhauer born Melissa Sassin, the Michigan native graduated from the University of Washington in 2009 with a degree in classics and classical literatures, languages and linguistics. 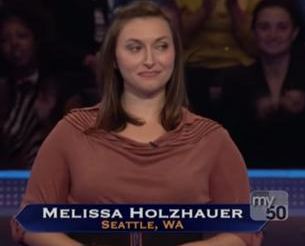 She later attended Brown University where she completed her master’s degree in classics and classical languages, literatures and linguistics in 2012.

According to her LinkedIn, she is listed as an “enthusiastic tutor,” focusing on test prep, in the Las Vegas area. She previously worked as an ACT and academic tutor with StudyPoint. She also worked as a Kindergarten Teacher in Thailand, a Youth Development Specialist through Seattle Parks and Recreation, and a Volunteer Coordinator at a non-profit.

James and Melissa have been married since 2012. Since then the couple has welcomed one child together. Melissa gave birth to a daughter in 2014.

Melissa, like her man, has a thing for game show competition. She actually appeared in 2014 on the daily version of “Who Wants to Be a Millionaire?” and was a winner herself. She previously appeared in the World Quizzing Championships in 2012 –where her husband finished in 34th place.

The two are also involved in charity work and enjoy giving back to the community. The two donated 10k to the Las Vegas Natural History Museum.