Noel Biderman the Canadian CEO of Avid Life Media, owner of the cheating internet site Ashley Madison is happily married to his wife Amanda Biderman, although Noel said he has never been unfaithful to his wife, he would cheat on Amanda so fast if his marriage was sexless. 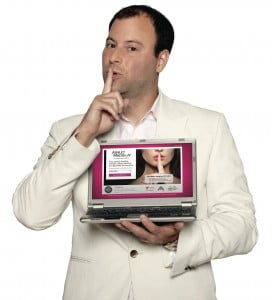 Amanda Biderman and Noel Biderman’s site Ashley Madison is by far the largest cheating site serving over 38 million users in over 50 countries, those cheating, desperate clients have given Biderman more than $1billion since Ashley Madison (named by combining two of America’s favorite baby names) was founded in 2001.

The site’s motto “Life is short. Have an affair,” gave that little push people needed to make up their minds about starting an affair, it drives them to create their profile, and search for the perfect partner to cheat on their spouses; remorseless about their actions after the guarantee Ashley Madison gave them regarding their personal data- no name, address, payment method, none of that  never under any circumstances they’ll reveal to anyone.

But nothing can’t stay hidden from the prying eyes of smart hackers who call themselves The Impact Team hacked into the server a month ago and gave Biderman’s Avid Media an ultimatum to take Ashley Madison and its sister site Establish Men down or they’ll reveal every user’s info.

“This event is not an act of hacktivism. It is an act of criminality. It is an illegal action against the individual members of AshleyMadison.com, as well as any freethinking people who choose to engage in fully lawful online activities. ”

“the criminal, or criminals, involved in this act have appointed themselves as the moral judge, juror and executioner, seeing fit to impose a personal notion of virtue on all of society. We will not sit idly by and allow these thieves to force their personal ideology on citizens around the world. ”

“Avid Life Media has failed to take down Ashley Madison and Established Men. We have explained the fraud, deceit and stupidity of ALM and their members. Now everyone gets to see their data, ” 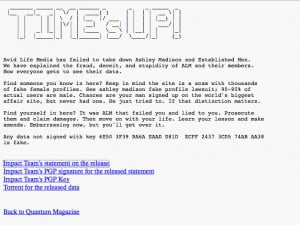 Yesterday, everything (10 gigabyte database file) was posted on the dark web and BitTorrent, however is only accessible through a specific browser.

Amanda Biderman’s hubby born in Toronto and raised in a Jewish family graduated in 1990 from the University of California (economics) and in 1996 from Osgoode Hall Law School.

In 1997, the 43-year-old former sports attorney became director of all Canadian operations of Interperformances Inc, three years later Move introduced him as their General Manager and Jump TV named him vice president in December 2006.

CEO of Ashley Madison in February, 2002 and President and CEO of Avid Life Media Inc in August, 2007.

A man like Noel was a complete womanizer, but according to his wife of nearly 12 years Amanda Biderman, her husband was never a womanizer, but he was charismatic..

“He was not a savvy dater, no smooth womanizer,” recalls Amanda. “He had forgotten even the small change for the parking meter – I liked that.”

“He was always the magnet of any discussion, even before stepping into this role. He has a charisma that spoke to me from the moment I not only laid eyes on him, but heard him articulate his vision for a happy life.” (For the record, that vision includes: “finding time to do what I love”, “being a leader and role model for my kids”, and “making sure to communicate my needs and expectations with those around me”.)

People criticized them for not practicing what they promoted on Ashley Madison, Amanda Biderman who said she is not 100% comfortable about her hubby’s mine of gold has her opinion about those critics..

“Personally, it was hard at first to understand this environment,” she concedes. “I’m not condoning it. There’s definitely a brokenness around these relationships – people are trying to find themselves, and find happiness. But I [also] understood this was a business and not our personal philosophy. And who are we to judge others?”

“I’m sure most people assume that because of what Noel does, we must be in an open relationship. But this is absolutely untrue.”

If she is sort of OK on the site, would she be ok if her husband had been unfaithful?

“We have such a great relationship, and are open about our needs, that it really would come as a big surprise.”

Amanda Biderman’s beautiful face appeared in an Ashley Madison billboard campaign along with the slogan that reads: ‘Your wife is hot, but so are ours!’

“People say to me, ‘How could you be married to him? Don’t you feel embarrassed?’ And: ‘How could you live with yourself?’ [But] I find it exhilarating waking up beside someone each day who is doing something no other person before him has ever done.”

Born in South Africa, 39-year-old Amanda Biderman daughter of divorce and mother of two has explained Ashley Madison to her children..

“They will think about it the way I do. They will know and accept that it is a profession and not the way we live our lives.”

Noel joins her “I am prepared for fully-fledged honesty,” he says, “and I hope that they judge me for the father they see me being. But if you want to know the one thing that keeps me up at night? What is the legacy effect of creating this business, potentially, on my kids?”

Amanda Biderman used to work in marketing in the past works as a consultant at Ashley Madison.

It was a market gap and an issue that needed to be addressed. That’s how I see it,” she says. “I try to focus more on that it’s a business. … giving people what they need.

In a way, the business has only helped me in learning how to be a happy couple. It’s easy to say you don’t feel like having *** or you’re tired or whatever. I make a real effort. If Noel wants to be intimate, I can change my mindset instead of just saying ‘tomorrow.

With the recent Ashley Madison hack,  the names of several accounts belonging to police authorities, government workers, celebrities and athletes all over the world were revealed, however one name overshadowed them all and that is the one belonging to Ashley Madison’s CEO Noel Biderman, who even though he said he never cheated on wife Amanda, Buzzfeed News reported he didn’t stay faithful to his wife, and he might  have cheated on Mrs. Biderman not once but several times.