Alvina’s hubby has been in the public eye for decades, the 47-year-old entertainer had been in the industry since 1995. Born August 15, 1970; the California native can be described as an actor, comedian, writer and game show host.

Anderson is known for his numerous roles including the role as Detective Kevin Bernard in the television series Law & Order as well as leading roles in K-Ville and The Shield. He also plays Glen Whitmann in the 2007 blockbuster Transformers. He’s also landed roles in other productions including, Me, Myself & Irene, Kangaroo Jack, Agent Cody Banks 2: Destination London, The Departed, Transformers and Scream 4. He started on his own sitcom All About The Andersons back in 2003 and is a regular on Food Network.

Most recently he can be seen on the ABC sitcom Black-ish –where he also serves as executive producer and as of 2016, he also appears as host for the game show, To Tell The Truth.

Anderson will have to answer that same question after he was recently accused of assaulting a woman. Will his wife of 23-year back him up? 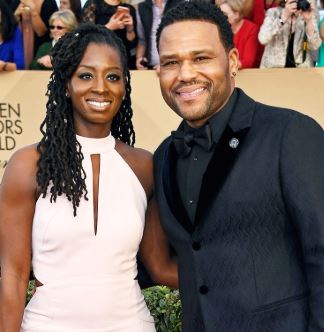 Alvina Stewart and Anderson are college sweethearts who tied the knot in 1995. Since then they have welcomed two children together, daughter Kyra Nicole Anderson 21, and son, Nathan Malik Anderson, 18.

The couple has certainly faced their fair share of trouble in the past. Back in 2015 it was reported they were headed for divorce but months later it was announced Alvina Stewart who also goes by Alvina Anderson –had asked a judge to dismiss the divorce petition.

The longtime wife and mother of two, keeps busy going to the gym, she is described as a gym rat. Unlike her husband and children, she enjoys her privacy and stays out of the spotlight.