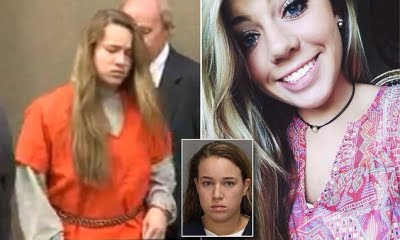 Olivia Smith who is accused of killing her 17-year-old cousin Abbey Hebert last November, has been indicted reports say. The teen has been indicted on charges of malice murder and felony murder, according to the Daily Mail.

Initial reports said Olivia Smith murdered her cousin in a stabbing after the pair had smoked weed together.

Olivia Smith is a resident of Canton, Georgia –The link between the teens comes from Olivia Smith being the niece of Hebert’s stepfather, as reported by the Atlanta Journal Constitution.

It has also been reported that the two teens, were very active on social media and kept regular communication between them. Just days before she killed her cousin, Smith tweeted ‘love you sweet girl’. ‘Love you more than life,’ Hebert responded. On the morning of November 14, both teens allegedly got into an argument that resulted in the stabbing of Abbey Hebert. Olivia Smith spent the night at her cousin’s home in Acworth, Georgia. Smith admitted to smoking ********* with her cousin that morning.

The two got into an argument while having breakfast and Olivia Smith stabbed Hebert with a kitchen knife, first inside the home and later outside where she chased her victim to the front yard.

Olivia Smith then told a neighbor, God had made her kill her cousin. The night before of the stabbing,

the pair attended a high school football game together and then went to a party, followed by a sleepover. One day before the horrific stabbing, Olivia Smith retweeted a Twitter note posted by Brielle Biermann, the reality star daughter of Bravo mainstay Kim Zolciak-Biermann, that read; ‘Everyday for me is Friday the 13th.’ Olivia Smith has been jailed since her arrest. According to her attorney she seems to be very remorseful. Abbey Hebert’s father, told media outlets, Olivia Smith was obsessed with his daughter, to the point of dying her hair to match Abbey’s natural color, as pictured above. (Abbey Hebert right, Olivia smith to the left)

Abbey Hebert’s parents were divorced over a decade ago. Her mother remarried to her stepfather who happens to be Olivia Smith’s uncle.

Other family relatives also said Olivia Smith tried to take Abbey’s beauty by aiming to her face during the attack.