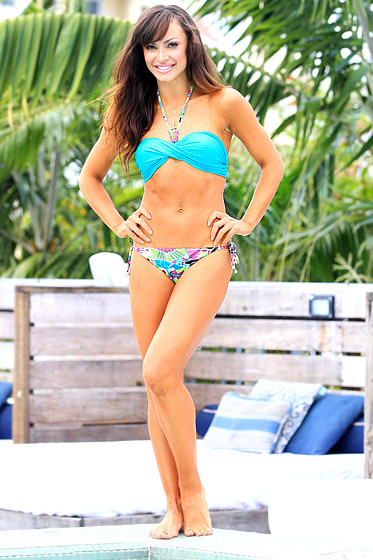 PinKarina Smirnoff, the beautiful Ukranian pro dancer on Dancing with the Stars, seems to be doing something wrong in the relationship area.

Karina was born in Ukrania on January 2, 1978. Her family immigrated to the she enrolled at Fordham University U. S. when she was 14, where they settled in New York. After going to Christopher Columbus High School, she enrolled at Fordham University, where she double-majored in economics and information systems programming and planned to attend law school. However, while still studying at Fordham, Smirnoff also resumed dance lessons. The call of dance was to much for her and she began to pursue a professional dance career.

She joined DWTS in 2006. Her partner was Mario Lopez. The chemistry was there and they began dating. They dated for some months, but the relationship died a natural death.

A couple of years later, in 2008, she began dating Maxim Chmerkovskiy. They became engaged, but by September of 2009, they split up.

Then she started to go out with baseball player Brad Penny. They too got engaged, but for some undisclosed reason they called the wedding off in December of 2011.

Rumors about Karina’s love life have abounded since then. There was a lot of buzz that she was dating Owen Wilson in March of 2012. In October of that same year, she was seen with ”Bachelorette” finalist Arie Luyendyk Jr.

Early this year it was being said that she’d gotten awfully cosy with her dance partner Jacoby Jones, but that rumor was soon laid to rest.

So it seems that as of now, she’s single. She’s pretty busy with the finale of DWTS as she and her partner Corbin Bleu are finalists, but the season is almost over. So how about it guys? Are you game to try your luck?