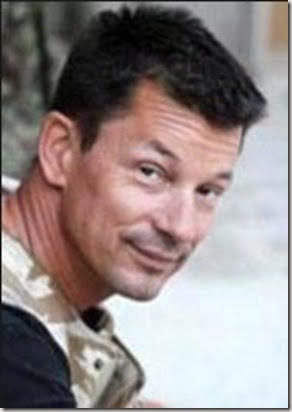 43-year-old Veteran war photographer John Cantlie was featured in a new ISIS video titled “Lend me your ears”. The footage was released on Thursday featuring Cantlie seated behind a desk, explaining the group’s message and warning that America and its allies are foolishly heading into another unwinnable war.

This time Cantlie is not kneeling n a bare desert hill under an open sky, waiting any second to be beheaded like his successors but there is no indication that would not happened in coming days.

The captive British journalist recalls how he was captured by the militant group also known by the acronyms ISIS and ISIL after he arrived in Syria in November 2012, saying:

“Now nearly two years later, many things have changed,” Mr. Cantlie said, describing the Islamic State’s expansion of territory in eastern Syria and western Iraq, “a land mass bigger than Britain and many other nations.” Learn more about Cantlie on his top facts below. He was captured while covering the civil war between President Assad’s army and rebel fighters; and was released a couple of weeks later along with a Dutch photographer, Jeroen Oerlemans (pictured above). That time, the two journalists were held at a camp in Syria by a group of foreign jihadists, who kept them hooded and blindfolded and repeatedly threatened to kill them.

#2 Mr. Cantlie was shot trying to scape his captors.

Mr Cantlie tried to escape on the second of his seven days in captivity, one of those who opened fire was British, wounding him in the elbow and his Dutch friend in the leg.

#3 He was treated by a doctor, who was using a clearly labeled NHS medical kit. The doctor who was senior member of heavily-armed militant gang attended Cantlie, who suffered nerve damage in his left arm and was left limited movement in his fingers.

#4 He was rescued by the Free Syrian Army

Both photographers eventually managed to escape from the camp in Northern Syria with the help of the Free Syrian Army, the rebels fighting Assad’s forces.

he was still eager to return to Syria to report on the war.

Four months later Mr. Cantlie was captured again in Syria while riding in a car with the American journalist James Foley. He was abducted on November 22, 2012 in northwestern Syria and has been in captivity ever since.

#7 He was in a relationship

At the time of his first kidnap, Cantlie was in a romantic relationship with girlfriend Charlotte. He asked one of his captors –a fellow Londoner –to text his girlfriend to let her know he was alive but this one, refused.

#8 His website and trial against one of his captors vanished.

In 2013 when he could not be summoned as a witness, the trial collapsed. His website Fastfeatures.com is a dead link.